…Shaya Goldmeirer, reader, commenter, Yekke, and all around great guy won a copy of Meoros HaShabbos. Yashar Koach and may it enhance his Shabbos.
To find out more about this sefer, click here.
I’ve been looking through it and ‘catching up’ on previous parshios. It is amazing. Not only is it very clear and concise, but the stories added in for each parsha are great. It’s not too big to have at the Shabbos table, and the pages are printed on a high-quality glossy paper! I’m looking forward to buying volume 2 when it comes out.

Thanks to the generosity of the Agudath Israel Midwest Convention (more on the keynote addresses later), I have an extra copy of Meoros HaShabbos volume 1 in English, that I would be willing to send to a blog reader. I’ll be happy to send it to the first reader that emails me.

Now Joseph could not bear all those standing beside him, and he called out, “Take everyone away from me!” So no one stood with him when Joseph made himself known to his brothers. And he wept out loud, so the Egyptians heard, and the house of Pharaoh heard. -Berashis 45:1-2 quoted from here.

I know that Rashi on the first pasuk says that by sending the Mitzriem away Yosef was being sensitive as so not to embarrass his brothers. Rashi is teaching us a very important lesson. However, why does the pasuk say that the Egyptians and Paro heard Yosef cry?

I was thinking about this and I might have found a lesson in it for me. R Yisrael Salanter said that, “One’s face is considered a r’shus harabim (public area)”, after he saw someone in the street looking very depressed. I think there is a fine line between wearing one’s heart on one’s sleeve and being completely deadpan or non-emotional in the public arena.

Yosef was always setting an example not only as viceroy, but as a Jewish leader. It is common to want to be senstive to others, as Yosef was to his brothers. At times, by putting others’ needs before one’s own, one can tend to forget about himself and his feelings. I think Yosef needed to cry as an expression of his emotions before his brothers. I believe he also wanted Egypt to hear a more ‘human’ side of him, not just him as Paro’s right hand man.

To be someone who thinks about others’ feelings, and at time same time not negate their own is, in Yosef’s case, all in the timing. I hope you have a Gut Shabbos Kodesh!

Right off the bat, I have now idea how any teacher can go through a whole day an not lose their voice. Kol Hakavod to everyone in Chinuch or education.

This week I spent my lunch time watching my son’s second grade class, so his Rebbe could attend a staff Chanukah luncheon. Basically, I was to sit down and watch my son and his fellow friends eat their lunch. I, of course, didn’t really feel like sitting.

Then I told them that before coming in the class I opened my car trunk and found: A case of water, a “Snap-N-Go” baby carset stroller, and a skateboard. I asked the class what they could learn about me from these three items.

Then I asked them what sports teams are in Cleveland…of course they named the Indians and the Cavs. Then I told them a story about a Rosh Yeshiva from Cleveland, R Mordechai Gifter z”tl (whom their second grade Rebbe had learned bei for a number of years), who when in high school at MTA had a collection of Rabbi photos on his dorm wall. The photos were set up as a square with a blank spot in the middle. In this black spot, as I recall, was a piece of paper with the words, “Where will you be?” written on it. This is what he looked at when he wasn’t in class. I explained to the boys that what we see and surround ourselves with says a lot about who we are and what’s important to us.

I asked them why it’s important to place your menorah either in your doorway or by a window? Several answers included: it’s the halacha, so that people know which homes are Jewish, and so that we can let the mitzvah shine. The last answer is the one I used to start a talk about the importance of loving to do mitzvos and so happy that you make your own light. I told them that when people walking by their homes see a menorah or see their family sitting down to eat on a Shabbos night, it sends a powerful message that lights up the world.

After that we played one of my favorite games, called Good News/Bad News. It was taught to me years ago from a Rabbi who as since ‘retired’ from being a ‘Kiruv professional’. Basically you write down a list of all the negative that the class come up with to describe someone. We got things like: weirdo, not good at sports, funny dresser, smelly, come to class late, doesn’t finish homework, etc. All in all, our list included 24 items given within a five minute span.

Then we moved on to the Good News. The class lists all the positive things they can say about someone, such as: he’s smart, nice, friendly, good ball player. We only got to 14 items in the same five minute span. The point, as I explained to the class, was that it’s much easier to find bad things to say about someone than it is to find the good things to say.

Lastly, I paired up the kids in groups of two (yeah, I realized that a pair is a group of two), and had each one say out loud something nice about their partner and then had the partner do the same.

I’d like to think that I gave over some important lessons, but who knows?

Ponder this, and feel free to comment…if you had a short time with your son/daughter’s peers and wanted to give over some ideas that are important to you, what would they be? 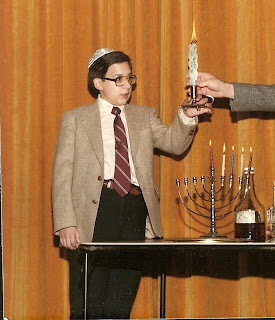 …I had my Bar Mitzvah. A few thoughts come to mind:

Monday night, Erev Chanukah , I drove up the ten or eleven blocks to the supermarket. It was dark. Well, with the exception of a few token flashing lights and lawn decorations along the way, maybe a total of 2 per block.

I drove past each home thinking that come Tuesday night on this same avenue the majority of the homes I was passing would have lit menorahs in the windows. In the span of (at the time) less than 20 hours there would be light. I look forward to walking to shul Shabbos night and truly appreciate living in a community with so many menorahs shining out of the homes.

It’s a good feeling to know that soon I would be lighting my menorah. I look forward to it each year. For me there is a connection between the past, present, and future when I light. To be able to attach myself to a mitzvah that so physically represents something from the times of the Beis Hamikdash kind of blows me away. I know that these thoughts are less than original, but this is what I was thinking about the other night. Freilechen Chanukah! 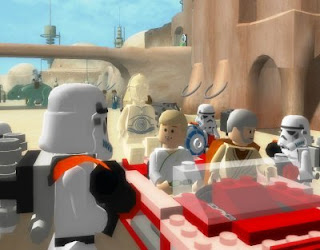 Recently, while leaving a kosher supermarket in Skokie, IL, I noticed a man putting out a stack of booklets titled “THE END IS NEAR” published by the “Assembly of God” near the entrance/exit of the store.

The other day I was ________ and I was reminded about very deep mussar concept that is usually overlooked.
a) thinking about Star Wars
b) listening to an old hardcore punk rock album
c) reading either R Hirsch or R Dessler

Interestingly enough this concept was manifested in something my kids _______ last night before bedtime.
a) did
b) said
c) ate

I was then reminded of a story about ________ that had a profound impact on me when I was becoming Torah observant.
a) R Yisrael Salanter
b) R Nachman of Breslov
c) coffee

The story has to do with how we use our ________ to the best of our abilities.
a) time
b) unique talents
c) free wireless connections

This lesson isn’t really focused on so much in ________, but really starts at home.
a) the yeshiva/day school system
b) most blogs
c) your average kehillah

I guess, in the end, getting to know yourself can be a pretty difficult job. Thanks for reading. An actually post will be popping up soon.

Please read this post by R Harry Maryles and join in davening for his grandson.