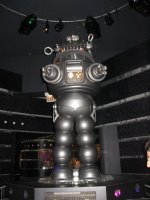 (Picture taken at the Museum of Science
and Industry in Chicago on 12/24/06)
In my previous post, , A Simple Jew commented: Have you found a positive action to replace the “negative” action of checking your e-mail so often?
The most obvious result of “Rubber Band Mussar”, in my case, is a more focused day in the workplace, more quality time with my family, more time to open a sefer, and an understanding of the difference between what I want and what I need. These, in and of themselves, are positive actions, however they are secondary.
The most obvious positive action is ….Awareness.
I’ve quoted this before, but in second chapter of Mesillas Yesharim it states that:
THE IDEA OF WATCHFULNESS is for a man to exercise caution in his actions and his undertakings; that is, to deliberate and watch over his actions and his accustomed ways to determine whether or not they are good, so as not to abandon his soul to the danger of destruction, God forbid, and not to walk according to the promptings of habit as a blind man in pitch darkness.
No one wants to be a robot (although the life size Robbie the Robot pictured above was pretty cool), or a slave to habit. I sure don’t! The awareness of my addiction to checking email has, ironically, helped to stop me from acting robotic and doing things simply by rote. However, it’s more that just being aware of the choice I make to go or not go online. It’s a learning process and I am becoming much more aware of my behavior in general. It’s not so easy.
Example:
Last week my wife asked me to go bring in some milk from the car. I “stopped for a second” to check my email on the way and found myself sitting at the computer for 15 minutes. It was 32 degrees outside and the milk was fine, but that’s not the point. My wife asked me to do a simple thing and I let myself get distracted. That’s the point. I should not have touched the computer when I had something else to do. I could have used a rubber band then (of course now everyone at home is ready to shoot rubber bands at me thanks to my new mussar exercise). Things that so natural are the things that I often don’t make conscious decisions about.
With that being said, after being Torah observant for 19 years, I find myself doing some things by rote and it bothers me. I try to keep myself in check most of the time, but an automated Shemona Esray here, the conditioned response of an “amen” there, a half-hearted “Gut Shabbos” to a stranger just to be yotzai for saying “Gut Shabbos”, well…it adds up. It’s something I’m not true happy with, but at least I’m aware of it. I find myself these days being much more careful before I speak and aware of how best to use my time.
Like I wrote, no one wants to be robot. Not when I come to email (and the urge to read email is totally in full force after a posting goes up) and certainly not when it come to my Avodas Hashem.
Mediocrity is my enemy. Becoming comfortable with my Yiddishkeit not only pushes me away from Hashem, but from a chinuch aspect, it’s like the black plauge. Our children pick up on everything we do (I’ll write more about this in a future post). I remember listening to the lady at the post office say that her mother mumbled the blessings on Chanukah, and thinking that this is not how I want my children to remember their childhood and our Torah observant way of life.
As mentioned before, I have found myself become much more aware of everything I do. I find myself questioning if it’s “what I really need to do right now” and thinking about my actions. I recall certain thoughts and feelling I had when I decided start wearing a yarmulka in public. How careful I was about my manner of speech and behavior. Sometimes I feel that I have become too comfortable with who I am and my yiddishkeit, and it worries me.
When I wrote my previous post I really didn’t think that this rubberband thing would end up making me really examine my actions so much. I’m happy that I’m able to grow from my blogging, and in this case, with the help of several comments.
Last night I heard something that really made me angry. Well, at least I was aware that I could have become angry. Without missing a beat, I stuck my hand in my pocket and felt my trusty rubber band. Later my wife commented that she was actually surprised that I wasn’t more upset. Awareness of my actions saved me from losing my cool, this time.
Yet again, later that night, I went to check my email and realized that I stayed online longer that I needed to. Each opportunity is a challenge and a battle, but that’s alright. I fight, fall, and get up again.
Over the past few months (especially in the summer) I’ve felt that my ‘hobbie’ of blogging and reading other blogs has taken up a major amount of my time. I can say now, since I’ve become more mindful of the little things I do, I feel a new found sense of freedom about my hobbie. It’s important to realize what I am a slave to.