It’s been almost a week since the Chicago Siyum HaShas event. I held off on posting right way, because I was curious if the excitement of the celebration that I felt, along with my 12 yr old son, was just just a flash of light or something more lasting. Just that fact that the theater, which holds 4,400 people was pretty much sold out still blows my mind.
Looking back, there were a few things that I viewed as highlights.
Organization: The fact that months of planning and coordinating went into making the event run smoothly was evident. The Agudath Israel did an amazing job from start to finish. Emails were sent describing in detail where to park, which entrances to use, information about snacks for purchase prior to the event, etc. Countless committee chairs, volunteers and staff spent countless hours helping. It was also planned that there was one unified mincha and maariv.
Hakoras HaTov: The speakers at the Chicago event included HaRav Shmuel Fuerst (who gave Dvrei Praicha), a video of HaRav Shmuel Kamentsky (which was broadcasted life from MetLife), HaRav Uren Reich (who gave Dvrei Chizuk), HaRosh Yeshiva Avrohom Chaim Levin (who made the Siyum), Rav Gedaliah Dov Shwartz (who made Hascholas HaShas), and Rav Yissocher Frand (whose address was broadcasted live, as well). Each of the Rabbonim made specific mention of the Hakoras HaTov that must be given to the wife and children of those who are involved in Daf Yomi.
Enertainment: After the Siyum we were treated to a men’s choir made up of people from across the community, truly representing Klal Yisrael. Their voices blending together making harmony gave all who listened a sample of what true achdus is all about. They were accompanied by HaTav Orchastra. Many of us broke into dancing and, I admit, it was very cool dancing with people I didn’t even know celebrating the greatness of Torah. I will also say that the two videos we say, “Daf through the Decades” and “Heroes of the Daf” were very moving.
A physical connection to Daf Yomi: A touching moment, for me, in Chicago was when HaRav Gedalia Dov Schwartz (Av Beis Din for the RCA and the cRc) was given the kavod of saying the beginning of Gemara Berachos. He held up and used a gemara he received for his Bar Mitzvah. It was printed in Petrakov, where Rav Meir Shapiro was Rav in 1931, the year of the first Siyum HaShas…I got chills. That is totally amazing, because it’s something physical that make the connection real for all of us.
Rabbi Frand: As always, he was wonderful. It was nice, for the Chicago people. that he spoke so much about Rav Nosson Tzvi Finkel zt’l. That line at then of his address, “Beyond your reach is really within your grasp” was golden. Rav Frand’s address was a live feed. I happened to tweet that line after he said it and saw that a friend at the NY Siyum tweeted the same thing 14 seconds before me. I was so inspired, that I created (thanks to a google search and a little background in graphic design from the mid-1990s) the image below. I use it as a lock-screen for my phone. Every time I use my phone it reminds me to keep on going a little further than I think I can. Great mussar for me.
My wife mentioned to me a week and a half before the Siyum that we have been married for 15 years and had I been “doing” Daf Yomi this could have been my second Siyum HaShas. She only meant it as a comment, but I took it to heart and, bli neder, I have committed to learning Daf Yomi in a shiur (so far I have hit both morning and evening shiurim every day) in hope of being a participant and not just an observer at the next Siyum HaShas.
In the short time that I’ve been learning Daf Yomi I have noticed two very interesting things about myself. Firstly, I am constantly thinking ahead about my schedule for the upcoming days and what shiur I will attend (BH we have a multitude of shiuim and I am still trying to find a good time and magid shiur to attach myself with). Secondly, I have felt much more creative and energized that I have in years. I won’t chalk it up completely to the koach of limud Torah, but it is probably more due to the residual wave of excitement of starting something new.

I have to thank all of my sponsors who donated over $2,000.00 for Chai Lifeline.  Seriously, you’re amazing!  What, feeling guilty that you didn’t sponsor me?  Don’t fret, you still have time by clicking here.


I have read that a common motto in exercise is, “Feel the pain”.  After Sunday’s bike ride with Chai Lifeline, I totally understand what this means.  “Biking the forest” pushed me to the limit.  Biking 54 miles last year on Lake Shore Drive was a piece of fat-free cake compared with Sunday’s 34 mile bike ride at Linne Woods.  I found the hills to be much more challenging than I expected and to say that I pushed myself, is not an exaggeration.  Of course, it was for a great cause and if I am a little sore and sunburned, then so be it.  It was TOTALLY worth it!

Our ride started at a picnic grove where Chai Lifeline had fruit, Granola Bars, and water waiting for us.  The trail we took went north for 10 miles to the beautiful Chicago Botanical Gardens, at which point, people could turn around and return to the picnic grove.  However, I wanted to get in my 34 miles, so once I got the the Botanical Gardens, I then went back 7 miles and returned to Gardens.  All along the way Chai Lifeline had volunteers stationed with nice cold bottles of water for everyone.  After refilling my water and catching my breath, I biked back to join the group.  For those that wanted, a nice brunch was served, sponsored by Bagel Country after the event.  I was simply happy to drink some water in the shade.
When I got home I was greeted with hugs, high-fives, and a cold drink and something to eat.  Seeing how proud my wife and kids were of what I accomplished in memory of my father a”h, made it all worth it.  As I wrote above, this was quite a challenge, but it was also a opportunity to really push myself and see the effort pay off!  I am pleased that I not only biked the furthest of anyone on Sunday, but I also brought in the second highest amount of sponsorship this year.  To know that I was able to help Chai Lifeline with your support and encouragement is a great feeling and I am so glad you were able to help me.

For the first 3 hours of my 3.5 hour bike ride I listened to some amazing shiurim from Rav Reuven Leuchter, who is a very close student of Rav Shlomo Wolbe zt’l.  Two of the shiurim were about “Chinuch on Gadlus Ha’Adom” and the third was about the first few lines of Rabbi Yisrael Salanter’s Iggeres HaMussar (totally blew my mind how he he explains R Yisrael Salanter’s view of imagination/dimyon).  His understanding of Gadlus Ha’Adom (as being conscious that we are involved in a higher madrega of avodah than just mitzvah observance, but serving Hashem) fits so nicely with the concept of D’veykus (attachment to God) as brought down in the Bilvavi Mishkan Evneh seforim.  The 30 minutes of my ride was spent listening to Yosef Karduner, Piamaneta, Diaspora, Yitzhak HaLevi, Even Sh’shiya, Bob Mould, and a Russian band called Selo N Ludy and their cover of Bon Jovi’s “It’s my life” (funniest thing ever).
Chai Lifeline is still excepting your sponsorship of my ride.  That’s right, you have until Thursday morning to still make a donation.  Any amount would be great.  I’ll be honest, for the past three years I have raised more for Chai Lifeline’s bike event in Chicago than anyone else.  This year I am only short $591.00 of keeping that record.
Please feel free to forward this page to anyone that can help.  Every little bit helps.

You can sponsor me by going here.  Seriously, this is for Chai Lifeline, they do great work.  Thanks!!!

G2G- “Growing Together”, a project designed to promote
learning opportunities within the Chicago area,
creating a culture of growth that will strengthen our community
and bridge the gap between rote observance and inspiration.
Details after Shavuos.

Yesterday, Reuven ben Menachem Mordechai, the grandson of Rabbi Harry Maryles was niftar.  His body had been fighting cancer for 6.5 years and it was time for his neshama to return to the creator.  Like many others, I davened, learned, and did mitzvos in his zechus.  The levaya was very emotional, as you can imagine.  Rabbi Maryles delivered a hesped and it’s posted on his blog, here.

Tomer Devorah shiurim 6 and 7 by Rabbi Etan Ehrenfeld from the YU Torah Mitzion Kollel of Chicago are now available for streaming or downloading here:

Starting the Wednesday, December 14 at Ohel Shalom, 2949 West Touhy Ave, Chicago (SE corner of Touhy and Sacramento) at 8:30 is a new shiur given by Rabbi Daniel Raccah that I am very excited about.

Rabbi Raccah will be teaching Messilas Yesharim with the commentary of Bilvavi Mishkan Evneh.  I’ve heard some shiurim from Rav Weinberger based on this sefer, but I am uber-happy to have an opportunity to actually learn it inside with a tremendous Rav like Rabbi Raccah.  I have been hearing about him since I came to Chicago and was zoche to hear him speak this past Shavuos.  This blurb was emailed to me:

In this shiur we learn how Hashem himself is the one who personally “wipes away” our aveiros.

Thursday, December 8, 2011   7:00 pm
A Shloshim Memorial will be held as we mourn,
together with Klal Yisrael,
the loss of the Gaon and Tzaddik
HaRav Nosson Tzvi Finkel, zt”l
Rosh HaYeshiva
Mir Yeshiva, Yerushalayim 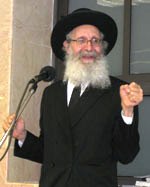 The third shiur from the YU Torah Mitzion Kollel of Chicago’s Tomer Devorah chabura is now online here.  That’r right.  If you are not working the day after Thanksgiving go ahead and download it or stream it.  It’s titled “Noseh Avon-Give people time to change” and what R Etan Ehrenfeld ties in from Rabbanu Yonah changed much of how I approach my own middos and avodah.  Remember, the chabura will not be meeting this Sunday, as R Ehrenfeld is out of town.