Initially, I told myself that not listening to music for a year while in aveilus wouldn’t be a big deal.

For the most part, I still feel that way. I mean, if I can go 33 days with out listening to music during sefira, then what’s a another 332 days? And it’s not really that long because when you factor in Shabbos and Yom Tovim you cut down that number by another 50 odd days. No big deal. However two interesting things have been going gone through my mind, over the past 8 months. The first I’d call “cravings” and the second I can only refer to as “flashbacks”. The second part (flashbacks) will be posted next.

Cravings
I was never a big fan of what’s knows as “pop” music. I was, though, very into finding new bands to listen to. These were mostly confined to a specific genre/subculture.  I craved listening to new music and going to concerts.  I was always true to those two or three bands/artists that I loved, but I was constantly reading music news publications, staying up all hours in high school listening to our local college radio station (I don’t know if these even exist anymore) and speaking to friends about music.

Once I became observant and eventually chose to listen to mostly Jewish music this craving sort of transfered over, as well.  I miss not keeping up with newer Jewish music.  I didn’t think I would, but I do.  The realization of having to almost listen my way through and network with people about what new artists are out there seems like a big undertaking. I guess after I’m “finished with my year”, I’ll start asking people what they are listening to.

For sure, I’ll save all the emails from someone I know who has recently started an email list about “new Jewish music”.  As his email states:

Please email me if your interested in Jewish Music Updates. Newly released singles, cd samplers, upcoming album info, music videos and more. Will always try to have something for everyone. bukin86@gmail.com

I recently read the first of his emails and was pretty impressed with the info. If you or your children are listen to any Jewish music, it is well worth it send an email to bukin86@gmail.com .

This seemingly too-incredible-to-be-true story actually took place. It was during WW2 where twenty-four rabbis were being held in Italy and faced being returned to Nazi- occupied Europe and certain death. Rabbi Aharon Kotler, founder and head of Lakewood Yeshiva and a leader of Ashkenazi non-chasidic Judaism in America, turned to the well-known Orthodox Jewish activist and subsequent author of Ethics From Sinai, Irving Bunim, and asked him who could intercede on behalf of these 24 rabbis. Irving Bunim suggested the Italian Mafia! Rabbi Kotler urged Mr. Bunim to contact them immediately.

To read the rest, click here.  This story, if nothing else shows the power of a bracha.

No, it’s not me!!  I prefer to stick to biking for Chai Lifeline.
However, I do have a good friend who’s wife has committed to run in the Chai Lifeline ING Miami Marathon on January 30th 2011.

She’s dedicating her run in memory of Rebbitzen Zlata Geisinky OBM, who helped run the Chabad of Bethesda and Chevy Chase.

If you are able to help out and sponsor the marathon runner, I know it will be very helpful.  To donate, please click here.
May her efforts bring joy to many who need help.

Those who know me in real life will agree that I’m not a sports fan.  I sit at kiddush Shabbos morning and nod my head in agreement as the discussion turns to local sports.  The extent of my attempts to follow sports are mostly limited to any updates I hear on CBS radio in Chicago and now, due to being in aveilus, what I might hear on ESPN radio.  What attention I do pay to sports is only because my 5th grade son is a fanatic and I know that showing some involvement in sports allows the two us to “bond” (even though he’s fully aware that I really know nothing about sports).

So, of course, I was moved to read the mussar that I saw in this post by CJ Srullowitz that you can find here. 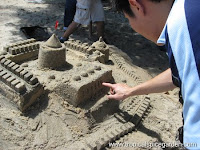 I am fairly stiff-necked.  What I mean is that I don’t like to change.  I like the idea of improvement and working on middos (thus my own gravitation towards Mussar), but this is mostly because I tend to resist change.

Last night I downloaded a shiur that, like it or not, is causing me to think about a number of things and might lead to change.  If you’ve ever seen or heard Rav Avraham Schorr, then you know that he tends to tell it like its, but with a level of clarity that few have in our generation, IMHO.

The shiur I downloaded regarding Tisha B’Av is available from TorahLectures.com, here.


“Either one invites and receives guests, or one is reduced to becoming a guest.”

So the school year has come to a close for my three kids.  All in all, they each had a pretty good year.  During the last few weeks of school several things happened that reminded me of how great my kids really are (k’ninah hora).


Our youngest daughter, who will be 4 in the fall, has become the bracha queen.  She proudly and clearly makes brachos on her food/drinks.


Our daugher, who is officially a third grader now asked at the end of the school year for pink siddur.  Not only does she daven with it every morning before camp, but whenever she hears that someone is sick she recites Tehillim.


Our son, who is now in fifth grade, just finished a great year with his rebbe, who allegedly, was the inspiration for the Journeys song “The Ninth Man“.  The last week of school his class has a siyum and his rebbe took time bowling and them to a dining hall managed by one of the caterers in town.  His rebbe gives out “zechus tickets” for learning, reciting Mishnayos, showing proper middos, learning over Shabbos, etc to the kids  and they collect them for raffle prizes.  My son was the second to last person to get picked, with only two prizes left.  He told me that he could tell which prize the other boy wanted, so he took it upon himself to chose the prize the other boy didn’t want (it was the game MASTERMIND), so that the last kid would end up with something he liked.  I was floored and very proud of him.