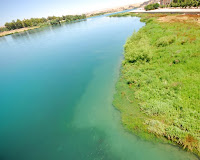 Bereshis 14:13 And the fugitive came and he told Abram the Hebrew, and he was living in the plain of Mamre the Amorite, the brother of Eshkol and the brother of Aner, who were Abram’s confederates.


Rashi: הָעִבְרִי [So called] because he came from the other side (מֵעֵבֶר) of the [Euphrates] river (Gen. Rabbah 42:8). [Text from Chabad.org and the JPS Transation]

Rav Shlomo Friefeld explains,  as printed in the book In Search of Greatness, (on page 14) quotes the actual Midrash, that “explains why Avraham was called Avraham the Ivri.  What is an Ivri?  The Midrash says that the term Ivri come from the word ever, which means a side.  It is often used for a riverbank.  Every river has two sides, this riverbank and the opposite one.  Avraham was called Avraham the Ivri, the “sider,” or one who stood on the side.  What does that mean?  The Gemara says that Avraham stood on one side and the entire world stood on the other.  He had his beliefs, and the entire world was opposed to them.

It is written in the Torah that the children of Israel were called “Ivrim”. The first person to be given this name was our patriarch Abraham. The term “Ivrim” has two meanings:

When man comes close to the Eternal by studying the Torah and observing the Mitzvot, he “comes from the other side” (“Ivri” means one from the other side of the river) just like our patriarch Abraham did. A man bound to the Torah is able to live with another who is not, even if their opinions are different. Why? Because the first man, as Abraham did, adjusted his convictions to the “other side”.

There is another reason why the children of Israel are called “Ivrim”. The root  of this word is “Avar” (past). This means that instead of being satisfied with everyday life that  keeps changing from one day to another, they lived attached to their past. They were bound to the magnificent past of our Saintly Forefathers, and this past is immutable in the image of the Holy Torah revered by our ancestors.

The ability to stay strong in your convictions and live with others who think differently than you is the mark of greatness.  It’s that ability, when rooted, as Rav Pinto writes, in the past, in Emunas HaChamim (faith in our Sages) and Zechus Avos (merit of our Forefathers) that gives each Jew the strength to be an Eved Hashem, like Avraham Avinu.

This was written Zecher Nishmas my father-in-law, Dan HaLevi ben Aharon a”h.  My father-in-law a”h not only survived the Shoah, but remained a proud Jew every day of his life.

Previous posts on Lech Lecha can be found here and here.

2 thoughts on “The other side of Lech Lecha”