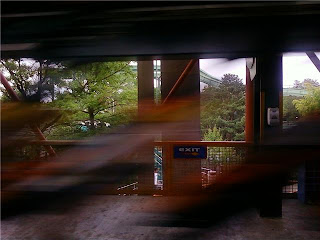 The photo above was taken with the camera on my cell phone.  It’s actually the rollercoaster cars of the Vertical Velocity (V2) ride at Six Flags Great America zipping past me at 70 miles per hour (from 0-70 in four seconds).


Growing up, I was wasn’t a big rollercoaster fan.  I wasn’t scared of them, but there was always that thought in my head (especially with wooden coasters, which are the best to ride on) that if I was on a ride and the car flew off the track, oh man, that would probably hurt.  As I got older I began to be less worried about this.  It’s not because my Bitachon was so great, but I realized that the odds were pretty good that nothing so horrific would happen to me.  I remember in high school reading an old interview with Abraham Maslow and he was asked what things he was sure of in life.  His answer was great.  He said that he was fairly sure that when he sat down in a chair that the chair wouldn’t break.  He based this on the fact that he has never fallen on the floor from sitting on a broken chair.  I think the same is true for most amusement park rides.


So, a week ago last Sunday I found myself in line for the V2 with my friend’s 5th grader son.  This kid loves coasters.  I happened to be the only one out of three adults willing to go with him on the ride- ok, I really wanted to go on the ride, too.  As I stood in line I was talking with a few people and found out that most of them were repeat customers for the V2.  They loved the speed and the felling of the straight 185-foot vertical freefall drop.  I stood in line, watched the cars race past me and thought about saying some Tehillim.  I got on and kept telling myself that as long as we stay on the tracks we’ll be fine.  I admit the freefall drop is pretty scary, but cool.  I got off the ride and it was over for me.  Of course, my companion wanted to again, but I said once was enough for me.


I get it, it’s fun.  But why go on any it again?   The best answer I can come up with is that people want to relive that initial thrill.  I can sympathize.  I remember my first real Shabbos.  I recall an awesome Shalosh Seudos with great niggunim.  I will never forget my first date with my wife.  We all want to go back, somehow.  The problem I have in attempting to use this real-life analogy is that it seems like you are going no where fast if you settle to go back on the same ride again and again.  Essentially you are choosing a thrill of comfort.


There are other rides based on the same principles of physics and speed in the amusement park of Yiddishkeit.  Life shouldn’t always be the same.  As I get closer to Rosh Hashana I feel more and more like I don’t really want to reach a level of ruchnius like I had on my “best Rosh Hashana ever”.  That isn’t creating something chadash, new.  That simply is going on the same ride again and somehow I don’t believe that is what Hashem wants from me this time.