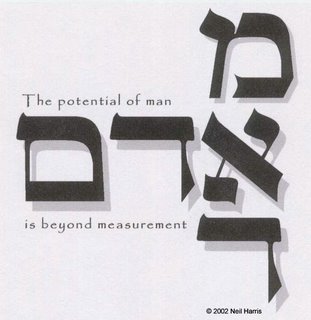 The picture to the left will be explained soon…

First, this posting is really an expansion of something I wrote here about things not working out the way you want them to. I’m, B”H, in a great mood. But, I’ll be honest, there are times when I’m not. This happens to all of us at one time or another. It’s sad, but true. Sadness, or atzvus, at times gets the best of us. We fall into a funk, or get depressed. That’s the worst. Rabbi Akiva Tatz once defined depression as “the despair of falling into an inability to act.”

To fall into the pit of thinking that we have no choices left is a terrible yeter hara. In a way, it’s the opposite of having free will. The truth is we can control how we choose to react to any given situation. It’s just, sometimes, we forget the we have a choice. Of the road in front of us seems too long and dark.

When I do feel down, I look that the picture that you see on your screen. I did the design and layout several years ago. I keep a framed copy of this picture on the bookshelf. Most people don’t look at it twice. Occasionally, a curious guest will ask me about it. It’s actually based on something I heard during my high school years, said in the name of Rav Yitzchok Hutner z”tl.

Rav Hutner, based on the Maharal, took a look at the words “adam” meaning man and “meod” mean very or more. Rav Hutner explains that after man was created on the sixth day, it says in Beraishis 1:31: And God saw all that He had made, and behold it was very good, and it was evening and it was morning, the sixth day.
Not just “good” but “very good.” The word “meod” seem to imply that something is beyond measurement. For example, most cars can only go to a predetermined top speed. The size of a house is based on the number of square feet in a lot and also how much money one uses to build the house. A computer is capable of holding only have so much memory (although that seems to change every other week). Rav Hutner said that people are not like this. We can grow beyond what we even imagine. When it comes to a person, our potential for greatness is limitless. It’s “meod“.
When I’m feeling down this is what I think about. My potential is beyond measurement. I just need to push myself.
Once, while taking the subway to Brooklyn on an erev Shabbos I stood in front of someone wearing a T-shirt made by “Champion” (the company is really know for their sweatshirts). The back of the T-Shirt had the following printed on it: IT TAKES A LITTLE MORE EFFORT TO MAKE A CHAMPION. What mussar!!! I think of this T-shirt at times, as well.

Music also cheers me up. Especially the Moshe Skier Band’s treatment on the classic Hafachta.
Speaking of Jewish music, blogger buddy, A SIMPLE JEW, had a great posting up yesterday. Take a few minutes and check it out, here.
Have a happy day and a great Shabbos Kodesh!!