From my earliest youth, I remember that the children would ask each other on the first morning of Pesach, “How long did your Seder last?”
This was true in my youth, and it is still the case today. If the children were to ask me this now, I would answer them, “I made sure to eat the afikoman before chatzos (midnight).”

May you have a liberating and freilichen Pesach!

Last week during carpool my 12 yr old son shared the following revelation with me:

Abba, did you know that a Mitzvah Tank is just an RV that they Na Nach up Lubavitch style?

I smiled at his his observation, but it also initially bothered me. I have always found it somewhat troublesome when someone copies something from someone else and then they (those who copy) get credit for being creative and original.  I cringed when people would tell me how Blue Fringe had this “awesome new song” called “Hafachta” (originally written and performed by Diaspora Yeshiva Band).  I smirked when teens would tell me that “they came out with another Willy Wonka movie, but that guy just isn’t as weird as Johnny Depp”.  Some remakes of movies and cover songs are not all bad.  I just don’t like it when the originals get overlooked for, simply, being original.

Now, I don’t blame my son.  He’s seen Mitzvah Tanks in Chicago.  He has also seen videos of Na Nachs dancing in Tel Aviv, photos of their Na Nach’ed up vehicles, and even seen some guys selling their swag Motzei Shabbos on Central Ave (in Cedarhurst, NY).  In his mind, the Chabad that copied the Na Nachs, not the other way around.  It’s his frame of reference only because he saw the Na Nachs do it first.

I have been thinking about this for over a week. At first, as I described above, I was bothered. Then, after some hisbonenus  I gained a better perspective on things.  A number of years ago I heard an amazing vort on the chatzatzros, trumpets, used in the Mishkan.  R David Orlofsky quotes Rav Moshe Shapiro, who brings up the point that after Moshe was niftar, the trumpets he used were put away and hidden. Yehoshua had to fashion his own. Rav Shapiro says the reason is that each generation doesn’t aways respond to the clarion call of the previous generation. While the message is the same, the mode for communiting it has to be different.

R Micha Berger puts it like this on his blog:

If each generation has to be approached differently then, kal v’chomer (even more so) for each person.
We know that, ” A person is obligated to see himself as if he were leaving Egypt.” (Pesachim 116b)
The way that I might perceive my own freedom from Mitzrayim is, in fact, totally different than how anyone else sees it.  This obligation totally makes sense based on my son’s observation about the Mitzvah Tank.  My son has no choice but to see things from his perspective.  Hopefully he will experience Pesach in a very personal and meaningful way.  Hopefully I will, too.

Originally tweeted by Rabbi Michael Green (follow him @rabbigreen) and found on a blog by Rabbi Shua Katz. 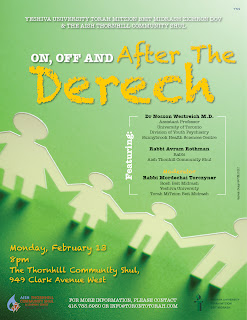 Last Monday, February 13th, the Rebbetzin’s Husband posted about an interesting panel discussion that Toronto’s YU Torah MiTzion Beit Midrash Zichron ran in conjuction with the Aish Thornhill Community Shul.  The program, titled, “On, of, and after the Derech”.  The event featured Dr. Rabbi Nosson Westreich, Rabbi Avram Rothman, and was moderated by Rabbi Morechai Torczyner.
The video can be seen here and the audio and is available here.

RavMosheWeinberger.com is offering an excellent series of parenting shiurim as free mp3 downloads, here.  Just scroll to towards the bottom of that page to get shiurim 1-10 of “Inspired Parenting”.  I own the cassettes and have listened to them over and over again.  I can’t even being to say how important theses shiurim are in terms of understanding the partnership with Hashem a parent has, the reason why you were given the children you have, and how to really give over Toras Chaim.  Here’s a little info about the shiurim (from the back of the cassette binder):

In the summer of 5760 (2000), Rav Weinberger conducted a series of special shiurim for parents seeking chizuk in that area of life that is most crucial and challenging.

Using as a base text a recently published kuntres (treatise) of Rav Silverberg from Yerushalayim, Rav Weinberger teaches taht the only way to rasie inspired children is by becoming insprired parents.

As in all of of his shiurim, Rav Weinberger taps into the vast reservoir of Chassidus and Machshava to take us on an exhilarating journey into the world of inspired parenting.

Again, the shiurim are available for a limited time here. 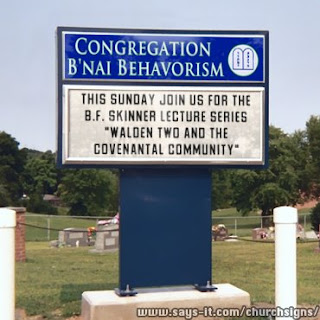 I have a found there a few factors involved when it comes to a getting a child to stay in shul and attempting to daven.  I am not a parenting, chinuch, or educational expert.  I am just a regular guy and these are my observations and what has, so far, worked for me.  Of course, if you child cannot behave in shul, then they really are too young to come to shul (regardless of age).  In no particular order the factors that I’ve observed are:
Unless you started reading biographies of gedolim since infancy to your children, most of them are not so keen on staying in shul for all of davening.  I can’t blame them.  Most rabbis that I spoken with or parenting shiurim I’ve listened to suggest letting a child stay in for “as much as they can handle”.  My son has been going to shul on Shabbos morning with me since he was 3.  He has, for the most part, been sitting with me, davening what he is comfortable davening, and until he was 10, going to groups.

On Shabbos I daven in a very nice hashkama minyan that regularly has between 45-60 halachic adult males, of which 3 are between 13-17.  This minyan isn’t a heavily kid populated (mostly because it’s at 7:30), but the minyan is very kid friendly.  Currently including my son there are about 5 other boys in 4th-6th grade.  We have davened there for almost 6 years my son has always left the beis midrash right before haftorah and then, if I’m lucky, resurfaced by Adon Olam.  About 5 weeks ago I made the observation to him that of the 6 boys in 4th-6th grade, there are 3 that come back in for musaf.  I asked him if he’d be interested in coming in for musaf and staying until the end of davening for 3 weeks and as a reward we’d go out for pizza, just he and I.


He agreed and after the second week of going out for haftorah and then returning before Ashrei, he actually stayed in for the haftorah and didn’t even leave.  B’li ayin hora, he has been staying in and doesn’t seem to mind.  Now, my son and his father are far from perfect, but we are both aware of what’s expected of us.

Please see this post from two years ago that discusses Rav Dessler zt’l.

Seeing a boy in shul yesterday run towards the aron kodesh to kiss the Torah and knock over a chair (almost into two people) reminded me of this saying by R Yisrael Salanter:
A person can rush to do a mitzvah and destroy the whole world in his path.

Rabbi Yakov Horowitz wrote an excellent article titled Raising More Tolerant Children, based on recent events in Eretz Yisrael.  He happens to quote a suggestion I posted on his website last week (based on a comment from Steve Brizel I saw years ago at BeyondBT).  Even without quoting me, it’s a great read.