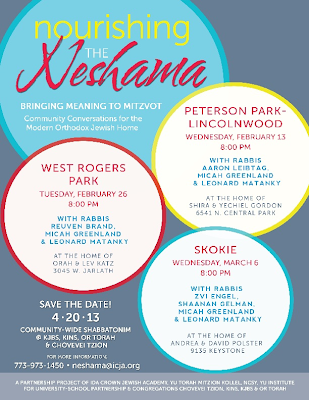 I am very excited about this new program and can’t wait to get invovled.

RavMosheWeinberger.com recently posted a free download of a shiur given on Feburary 17th in Brooklyn, titled “The Message of Purim-Appreciating the Little Good Deeds of Life“.  Click on the title in the previous sentence to go to the link.

I used the word “disdain” with a smile.  I don’t hate anyone (except for the nation of Amalek), but I really don’t like hipsters.  They have always rubbed me the wrong way.  No, this isn’t a rant.  Just take a breath and give your eyes another 1.5  minutes to read this post.

The main reason I disdain hipsters is, ironically, because I was a hipster before there were even hipsters, yet I (and my contemporaries) don’t get any credit.  My issue with hipsters is that they are coasting down a road that was paved by the punks and alternative-types in the 80s, yet they think being so anti-establishment is completely their chiddush.  It’s smacks of coolkeit (a termed coined by The Rebbetzin’s Husband in this post).  It’s a lack of hakoras hatov, on their part.  There are always people in every culture and subculture that go against the grain and do their own thing.  There’s the guy that loves to quote lines from obscure movies, the girl that can throw out a song lyric that seem apropos in any given situation, and the dude who is learning a sefer that most people have never heard of.  Now some people do this because they want to be noticed, while others are just into doing “their own thing”.  Then there is are the hipsters, who have skillfully jumped on every bandwagon, yet pretentiously figured out a way to do it while seeming to be original.

I see those hipsters sitting in front of their MacBooks or brainstorming about social networking and it strikes a cord.  They remind me that I still can get anchored to accomplishments of the past.  I see them and it takes me back to high school and my freshman year at college, when I was more idealistic and hung out with same-minded people who helped fuel my creativity.  When late nights out with friends revolved around coffee, watching people get drunk, and pseudo-philosophical discussions about Albert Camus, Ayn Rand, Jack Keroauc, and why bands should not sign with major labels.  Hipsters, by their nature, gravitate toward the past and seeing them totally blinds me from being grateful for my own present and envisioning the many simchos in my own future.  I’m not anti-the past, but if you keep looking back, then you can never look forward (as told to me by my brother-in-law many years ago).  Eventually the hipsters will get older and a newer breed will take their retro-throne.

It’s a well know teaching of the Baal Shem Tov that when we see deficiencies in others, it’s really a reflection of the deficiencies in ourselves.  With this in mind, I find myself wondering why do I actually care?  Why do I feel that I (and those who are in their late thirties and early forties) need recognition for doing something before someone else did it?  That’s the heart of the matter.  It’s guyvah, arrogance, and pure ego to think, “Hey, I did that first.”  I am guilty of it more often than I’d like to admit.  I don’t try to be the first person to eat a new restaurant (I’ll wait two weeks until the buzz dies down) or attempt to be the first of my friends to get the newest iPhone, just to say, “I got it first.”  However, I do find that I’ll read something and share it with someone and then get upset when that person shares the same thing without giving me the credit.  It’s a lacking on my part, I know.

Of course, my own frumkeit says that it’s because I remember that the 48th way to acquire the Torah is to say something in the name of the person who said it.  As the 6th mishna in the 6th chapter of Pirkei Avos concludes:  “One who says something in the name of its speaker brings redemption to the world, as is stated (Esther 2:22), “And Esther told the king in the name of Mordechai.”  As I wrote, it’s ego.  If I had stronger Emuna and Bitachon, then I’d be more secure in not needing recognition from others.  I think that’s the point.  It’s not that Morechai had a desire to be quoted by Esther.  It’s Esther (it’s always the woman) who knew it was derech eretz to tell Achashverosh.  Bringing the geulah means being mevatar your ego.

Rabbi Mordechai Torczyner, Rosh Beit Midrash of the Yeshiva University-Torah MiTzion Beit Midrash Zichron Dov posted the text of a drasha he gave over Shabbos.  Not only was I inspired by what he posted, but he eloquently weaved examples and sources that were a pleasure to read.  Here’s a teaser:

As our topic this morning is how we raise Jewish children, one lesson here is that we need to do more than tell our community’s children about our ideals; we need to live these ideals, visibly. I know this is likely obvious, but I state it as a first important step for parents, and for all of us, as adults; we are role models by dint of our simple presence.

The entire drasha (not too long) can be read on his blog, here.

I started this blog with one primary goal, to attempt to write more regularly. I figured if one person read a post and came back to read another (even if they didn’t make a comment) that would be enough of a push to write more. It worked. This blog also doubles as a good creative outlet and has kept me (for the most part) out of trouble.  It has also given me a sense of false comfort that I’ve, somehow, serving a role in Knesses Yisrael.  I’ll be the first to tell you that I know Hashem has more planned for me that my involvement in my chosen industry.  Finding a way to bring that to life is a challenge for me.  This blog is a good platform, but probably just one aspect of what I can do for our people.
That being written, I’d like to get some things off my chest. If you think I’m all into self-growth, it’s only when I’m comfortable with what’s sprouting.  If you think I’m a nice guy, it depends on the time of day and how much patience I have.  If you think I am constantly inspired, it’s only because I act the part.  If you think I am truthful, I am guilty of lying to myself and others.

The battlefield of self-growth (in my case mussar) is full of faux-victories.  Choosing not to scream at your kids or insult someone close to you isn’t so difficult, if you think before you speak and keep calm.  We might ascribe the action (or in action) as a major battle, but really it isn’t.  Unless you have a real Hulk-like temper and spend your day scream at others, then choosing not to scream, isn’t a real battle.  It could be a ploy of the Yetzer or the Sitra Achra, but it isn’t a full scale battle royal.

Recently I’ve found myself in several “real” battlefields.  Some I’ve navigated to on my own accord, others I have “run into” as tests.  I’ve been forced to confront people and myself.  Dealing with people is much easier for me than dealing with myself.  I’m realizing that the really battle is with myself and I am extremely cunning.  I thought that pulling an “Alter of Novardok” and staying in cabin not posting, à la perishus (separation) would help.  Had it been the correct course, then you wouldn’t be reading this now.  I guess a week was long enough. 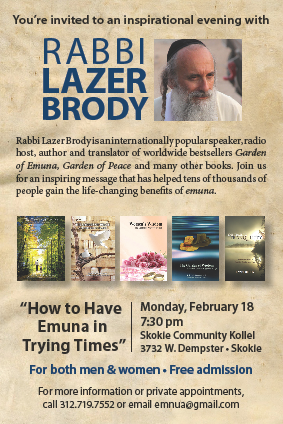 If you are free, I highly suggest you come to see Rabbi Brody. I attended a tish with him in June of 2010 in my neighborhood and it was awesome.  His translation of Rav Sholom Arush’s “Garden of Emuna”, is a best-seller among Jewish books. My thoughts on that sefer can be seen here.

I am not sure if this is temporary or permanent, but I decided to go on hiatus and stop posting, for now.

I have appreciated the comments over the years and am baffled by the 100s of you who visit this little blog on a daily basis.

Since Shabbos I have had some “odd” encounters with people, both in person and electronically.

I wish it could blame it on a full-moon or something in the water. All in all, I am drained and bewildered.

I am left only looking at myself in a mirror and asking, “What can I do to speed up and not delay Moshiach?”

This past Shabbos I was fortunate enough to hear (and meet) Rabbi Yakov Horowitz.  He was brought to Chicago as a scholar in residence at Ohel Shalom Torah Center (co-sponsored by the Chicago Rabbinical Council).

I heard Rabbi Horowitz speak Shabbos night and Shabbos day.  His topics ,”“But Everyone Else Has It!” The Challenge of Children and Technology” and ““Whatever” Surviving Your Child’s Adolescent Years” were amazing (more about them in future postings, b’li neder).

In addition to being a principal, director of the Agudath Israel’s Project Y.E.S., an authority on parenting and chinuch, he also is the author of several books, including the ground-breaking Let’s Stay Safe.  The book can be purchased here.

This past week, this amazing book became available as a read-aloud video that is downloadable.  The suggested donation is $5.00, but as the website states, “any donation will get you to the download page”.  Below is a 30 second sample of the read-aloud video.  As the title of this post indicates, my donation for the download is probably the best donation I have ever made.  There is nothing more important then my children
‘s safety.  Thank you, Rabbi Horowitz!