In less than I week I hit the pavement, again. I’ll jump on my little 18 speed bike and join a group of others who are dedicating their morning to raising money for Chai Lifeline, an organization helps children and their families cope with terminal illness.
I admit, this is crunch time. I will be biking in the evenings this week, gearing up (no pun intended, but then again, after anyone writes/says “no pun intended” it seems like a very well thought out pun) for a 34 mile bike ride. I am getting close to my fund raising goal, but I still could use some more sponsors. Training isn’t always fun, but this ride is important to me, since this will be my 5th year being involved with Chai Lifeline’s biking events. I ride in memory of my father a’h who lost his battle against a quick attack of leukemia. I ride for children that I have prayed for and are no longer with their families. I ride for children who are sick and fighting unbelievable odds. I ride because I have a bike and want to use it for more than a place to hang my helmet.
Thanks to all of those who have sponored me.
If interested in helping me, please click here.
Based on ideas said by Rav Moshe Weinberger on Lag B’Omer 5772
Prepared for the 5th yahtzeit of my mother-in-law, Rivka bas Chaim Yosef a’h
We know that everything in the world has an opposite. The opposite of happiness, שמחה  simcha,  is sadness, עצבות    atzvus.  Rav Tzadok HaCohen and others teach that to find the real source of anything in the world we have to look at the first time it is mentioned in the Torah.
Rav Itamar Shwartz, the author of the Bilvavi Mishkan Evneh seforim brings down that the first time we experience sadness in is Bresishis 3:16 when Adam and Chava are punished for eating from the Eitz Ha Daas Tov v’Rah.
So what’s going on here? When a baby is born we say, “Mazel Tov!”
The word עֶצֶב  means pain/or sadness.  It is the shoresh of the word עצבות.
Where is the sadness, the pain? The sadness, and this is the biggest sadness is the universe, a sadness that every one of us has felt, is the sadness of separation, of not being connected. A baby and a mother are one being in the womb. It is a relationship between a creator and that which is created. The child and the mother have the strongest bond in the world. There are echad, which is the gematria of ahavah. The pain of childbirth is the pain that the child feels, not the mother.  When a child comes out of the womb and the physical bond is broken, and that is the pain of separation, the feeling of dissconnect. Feeling apart of the source of life is the root of all sadness in the world. A child doesn’t understand this. A child view a connection with a parent only in terms of proximity  That’s why when a mother (or a father) leaves them, they cry. They feel the sadness of separation.
Mother, Ima, is the shoresh of Emunah. With maturity, the child grows up tp understand a powerful lesson (that is a teaching of Rav Shimon Bar Yochi): Unless you believe in someone or something, you cannot connect with it. Unless you believe that your parents love you, you will never have a true relationship with them. You can be half way across the world and still feel close with a parent.  You can be in the same room with your spouse and fill miles apart from them.  If you believe in your parents and the connection you have with them, then you can be across the world and still be close with them.  A mother never stops thinking, loving, or davening for her child. Not in this world or the next.
This is how it is with the Rabbono Shel Olam. We are connected to him, always. It’s the feeling of being connected that Klal Yisrael felt at Har Sinai at Matan Torah. We went, as my friend R Micha Berger says, from knowing all about Hashem to knowing Hashem. When we received the Torah we started living a life of mitzvos and feeling that connection. But we have to believe it. If we don’t feel that connection, then we are sad, we feel separated. That distance from Hashem is the source of sadness. As time goes by, we begin to feel distance from Hashem. We stop davening as much, because we feel that Hashem is far from us and not listening. We stop learning or doing chessed, because we feel isn’t who we are anymore.
It’s that connection to Hashem that he wants for us as we approach Shavuos.  Hashem want us to go from that rote observance, of feeling separated, to a feeling of being inspired and close to him. That feeling of having a relationship with Hashem is something that I saw and heard in every interaction I had with my mother-in-law. She loved Hashem and felt close to him. She felt that way at home, when she was at her shul for a shiur, when she saw her grandchildren, and when she saw a fellow Jew. She had a constant connection and a powerful lesson for me.
Five years ago, at the hesped for Joanie’s mother, a Lubavitch sheliach spoke and said that with Shavuos so near, Rivka bas Chaim Yosef must have known that it was time to get as close as her neshama could to the Mikor Chaim, the source of all life.  May we all be zoche to get as close to Hashem as we can during Shavuos and not just learn and eat cheesecake, but feel that connection we all desperately want.

“Please allow me to make a ‘private confession’ concerning a matter that has caused me much loss of sleep… I still remember- it was not so long ago- when Jews were still close to God and lived in an atmosphere pervaded with holiness. But today, what do we see? The profane and the secular are in control everywhere we turn.
Even in those neighborhoods made up predominantly of religious Jews, one can no longer talk of the ‘sanctity of Shabbat.’ True, there are Jews in America who observe Shabbath. The label ‘Sabbath obverver” has come to be used as a title of honor in our circles just like HaRav HaGaon neither really indicate anything and both testify to the lowly state of our generation. But it is not for Shabbath that my heart aches; it is for the forgotten ‘erev Shabbath’ . There are Shabbat-observing Jews in America, but there are no ‘erev Shabbath’ Jews who go out to greet Shabbat with beating hearts and pulsating souls. There are many who observe the precepts with their hands, with their feet, and/or with their mouths – but there are few indeed who truly know the meaning of the service of the heart!” (pp. 97-98)

I will copy/paste the last sentence again, because it’s hits home to me.

There are many who observe the precepts with their hands, with their feet, and/or with their mouths – but there are few indeed who truly know the meaning of the service of the heart!”

Shmuel has the text of a speech he gave at his sister-in-law’s wedding, based on a teaching from Rav Wolbe zt’l…
Tikkun!: Sheva Brachot speech

Hi. For the past 4 years, I have joined Chai Lifeline’s “Bike the Drive” event and biked Lake Shore Drive. Last year I actually biked 54 miles (the last 15 in the rain)! This year I am joining them again, as we bike 34 miles along the North Branch Trail of the Cook County Forest Preserve in the Northern suburbs of Chicago.

In 2010 and 2011 I was able, with your help, to raise unprecedented amounts of much needed funds for Chai Lifeline. Since my father, of blessed memory, had lost his quick battle with Leukemia in 2009 I have always dedicated my bike ride and funds raised in his memory. I can remember, after the first ride, calling him and telling him that I had biked a total of 30 miles (I had planned on biking only 15) and how proud he was that I was able to help such a worthy cause.

While I surpassed both my distance and fundraising goals last year, “Bike the Drive” was only the start for me. I had decided that I wanted to really dedicate myself to becoming more physically fit. A week after the bike ride I joined Weight Watchers. I am pleased to say that in just less than a year I have not only discovered there are things call fruits and vegetables, but I have also lost 24.6 pounds (as of 5/07/12). I have drastically changed both my own eating habits and realized the importance of being more mindful of choices in life. Joanie, Eli Meir, Rena Sara, and Miriam Tova not only motivate me, but see that you are never too old to change. That’s a true victory for me.

My objective is to raise at least $2000.00 by race day, June 3rd, and I hope you will help me reach this goal. All donations are 100% tax deductible. If your company has a matching gift program, your gift may be doubled or tripled.

Thank you for supporting me, and in doing so, helping children and their families cope with the diagnosis, treatment and aftermath of serious pediatric illness. Please feel free to forward this to anyone who might be interested in supporting Chai Lifeline.

I am not the most physically fit guy in town, but I have the best trainers in the world working with me…my wife and three kids. I know in the past I’ve had your support and I’m hoping you will sponsor me once again. All you need to do is tp make any donation that you can!

If interested, please feel free to forward this webpage to someone you know. 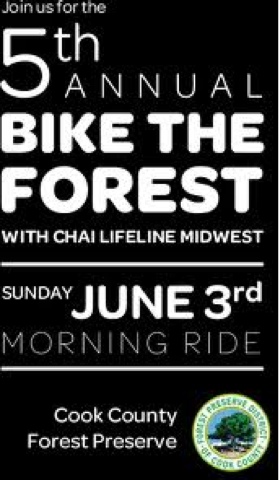 G2G- “Growing Together”, a project designed to promote
learning opportunities within the Chicago area,
creating a culture of growth that will strengthen our community
and bridge the gap between rote observance and inspiration.
Details after Shavuos.

I love it when something comes my way and I’m able to see that it’s a direct message to me from the Creator.
Charlie Harary recently posted an amazing story about Growing from Adversity, here.

A few of my thoughts about high school life were posted recently at BeyondBT, here.