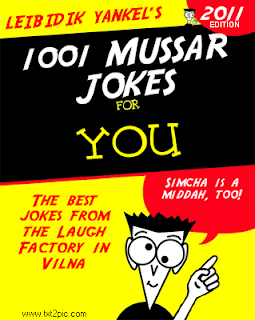 One day in Vilna he [Rabbi Israel Salanter] was seen discussing trivialities with a Vilna resident, even trying to amuse him by telling jokes.  Passers by were astonished.  They knew very well that R. Israel weighed his words very carefully and would not utted a superfluous syllable.  Yet here he was engaging in idle chatter and apparently joking without any restraint.  At an opportune moment one of his disciples asked him the reason for his unusual behavior on that occasion.  R. Israel answered that the person with whom he had been seen was in a depressed state of mind, and that there was no greater act of chessed [kindess] than to cheer up a downcast human being and revive his spirits.

He would also adopt this same attituted to his own family.  Whenever anyone became downhearted, he would recall amusing episodes of his life to allay their anxieties and make them happy. (Told by his aged granddaughter, Chana Leah Rogovin) – From Tenuas Hamussar (The Mussar Movement) by R Dov Katz

3 thoughts on “Straight from the Laugh Factory in Vilna…”