There are those posts that are fun to write and flow out of my mind to my keyboard like cold grape flavored Crystal Light going down my throat on a hot summer day.  There are also those posts that seem like the four teaspoons of cough medicine that tastes awful, but you know that you really have to just take it so that you’ll feel better.  This is one of those.

I recently spent a number of days with my family on a mini-vacation (nothing too exotic, since we only drove three hours from Chicago) and my wife pointed out that I tend to complicate decisions by over-thinking things, instead of striving to make things simple.  As usual, she’s right.  Instead of deciding what to have for lunch, for example, I found myself chesboning what I would be eating later, what snacks I might want, etc. based on if my lunch was to be fleishig, milchig, or parve.

It’s sort of the trap that Rav Moshe Weinberger often refers to as “eating from the eitz ha’daas tov v’ra” (I most recently heard this referenced on his Bilvavi I, shiur #9 mp3, but he has also mentioned it in his Oros HaTeshuva shiurim, as well as on Shavuos night a number of years ago).  The idea behind this is phrase is that we often over-intellectualize issues, actions, and decisions.  For example, let’s say that you see a friend and what to say, “Hi.  How’s it going?”  If you start hemming about if you really should say “Hi” to your friend, what if he’s in a bad mood, or  if you really even care how he’s doing, then you are eating from the eitz ha’daas tov v’ra.  You are making a simple thing way to complicated.

As I think about a writing project I took upon myself a number of months ago, I see that I haven’t gotten as far as I wanted, because I was very concerned about “crafting” my writing style to the point that it has prevented me from the real act of working on the body of the project.  I’m not saying that it’s not important to contemplate things and think out things, but I am beginning to see that at times my own over-thinking gets in the way of both progression and potenial.

So here I am, hoping not to really give this topic too much thought and, simply (pun intended), change my ways.  Since it’s Rosh Chodesh Elul, I’m figure that I’ve got this month to try to catch myself over-thinking and tell myself, “Stop and get simple”.  I guess this is easier written than done.  However, Elul itself, is full of simplicity.  We have guidelines on how to do teshuva, we listen every morning to the simple sound of the shofar, and with school starting for my kids, I’m reminded that a new year and a fresh start are upon me.

As an aside, I found a great shiur from Rav Tzvi Aryeh Rosenfeld zt’l, a pioneer in Breslov chassidus in America and E”Y (and also a talmid of  Rav Avraham Yaffen, the son-in-law of the Alter of Novardok and Rosh Yeshiva Beis Yosef Yeshivah in Brooklyn) online about Simplicity that I have found quite helpful.﻿

On Shabbos, I will often catch davening on cruise-control when it comes to these words.  It’s a habit that started when I was twelve and I was preparing for my Bar Mitzvah.  In fact, I use to pride myself on being able to say all of “Yekam Purkon” in under 23 seconds from the bimah.  Sadly, my that I was “the big cheese” being able to memorize this paragraph, without even knowing what it meant in English.

Like I said, even now, I will have to stop myself during musaf and consciously take time to read the Hebrew carefully and also translate the tefillos.  As I creep closer to Elul, I can feel both the excitement and the yirah (in a good way) that being on cruise-control just won’t cut it!﻿﻿﻿﻿﻿﻿﻿﻿﻿﻿﻿

Rav Yosef Yozel Hurwitz, the Alter of Novaradok said:
The worst thing that can happen to a person is to remain asleep and and untamed.

R Yisrael Salanter would say:
“Your heart is a private domain but your face is public domain.”
Sent via Blackberry by AT&T 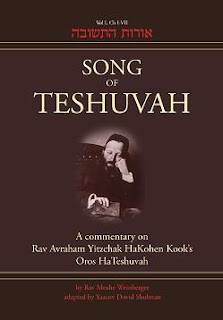 Perfect for Elul and Tishrei!  I have been a teleconferencing Rav Weinberger’s Oros Ha’Teshuva shiurim forever, it seems.  They were my Friday morning companion for the eight years I lived in Indianapolis and after that, too.  Thanks to Reb Yaakov Dovid Shulman, the commentary of Rav Weinberger has now become available in book form.  Oros Ha’Teshuva is not (for me) easy to learn just on it’s on.  Like most of what Rav Weinberger teaches, his ability to clarify ideas and bring them home to our level is a gift.  My copy is ordered already.

Includes the original Hebrew text of Oros HaTeshuvah, a new translation into English by Yaacov Dovid Shulman, and commentary from Rabbi moshe Weinberger.

“Teshuvah – repentance – does not come to embitter life but to sweeten it.”

HaRav Avraham Yitzchak HaKohen Kook wrote these inspiring words in Oros HaTeshuvah, a work in which he delivers the message that teshuvah is not a somber process of self-deprivation but a joyful journey back to Hashem and to the core of who we are.

When Oros HaTeshuvah was published in 1925, it was immediately accepted as a classic of Jewish thought and hailed for its brilliance of ideas, warmth of feeling, depth of psychological insight, holiness of spirit and mastery of Torah knowledge.

However, because of the difficulty of its language and the profusion of its exalted concepts, Oros HaTeshuvah has remained for many a sealed book.

Now Rav Moshe Weinberger, Mara D’Asra of Congregation Aish Kodesh in Woodmere, New York, has composed a commentary that reveals the treasures embedded within Oros HaTeshuvah. Based on an extensive knowledge of Jewish philosophical and inspirational literature, Rav Weinberger’s commentary is profound, moving and fresh, richly explicating Oros HaTeshuvah’s ideas in a clear and accessible but not superficial manner. His masterful expositions on a variety of topics (such as the difference between depression and a broken heart) are both lucid and invigorating.

This book will fulfill the hopes of those who are looking for a holy text written in a contemporary style that will inspire them to renew their spiritual passions, strengthen their religious commitments and energize their personal growth.

Place your order here or contact your local seforim store.

Ohr Naava has come up with an awesome free program for those of us who are uber-connected to technology called a “Day to Disconnect” on October 22, 2011.

From their website:
A Day to Disconnect is a worldwide movement, spearheaded by Rabbi Zechariah Wallerstein of Ohr Naava, which will take place on October 2, 2011. On that day thousands of people will voluntarily unplug their gadgets for some time – an hour, two or even all day. During this time, those who chose to disconnect will take pleasure in cherished relationships be it spouses, children, family, self or Gd.
Our goal is accumulate a total of one million hours. Can you imagine the impact of thousands of people choosing to disconnect their phones for an hour?
Can you visualize the amount of good accomplished during this time? Can you feel the impact of couples taking a walk together basking in nature and fully focused on one another? Can you see the glee in the hearts of the children who share their dreams, hopes and fears with honestly attentive parents? Can you see the intensity of the laugh lines on grandparents’ faces as they passionately share stories of yesteryear uninterrupted by texting? Can you imagine an hour without obsessively checking your cell for messages?
An hour where you feel present in the moment, an hour to close your eyes and be transported by the intricacies in a piece of music, an hour to communicate with our hearts, an hour of peace? Can you visualize the creativity and power that will be unleashed?
The possibilities are truly awesome.

I’m using my time (I picked three hours, but you can pick one) to spend time with my kids.
Who will you spend your hour with?

We often rush to our our old solutions, oblivious to the fact that our problems are the new ones.

Part of my previous career involved working as a mashgiach for an “out-of-town” vaad ha’kashrus.  I logged many hours and late night checking and counting dishes and silverware.  I spent a good deal of time speaking with many caterers and learned a few things about the business.

Whenever you work with a caterer or a banquet hall and there are fees for “dish rental” involved, it’s the industry rule that the price for the dishes factors in the fact that there will be some breakage involved and subsequent replacement of the items.  Every caterer know that a dish, glass, or fork won’t make it back to it’s proper home at the end of the event.  The cost to the client for dish rental reflects the replacement of said items.

As we inch closer to Tisha B’Av it’s easy to forget that Hashem has factored in the breakage of the two most sacred buildings ever constructed and allows us each opportunities and avenues to replace what was lost.

One of my favorite places in Jerusalem to get a bit of food was Pinati on King George. Since it’s the 9 days, I am asking if anyone has their recipe for fish with that yummy tomato-based sauce.