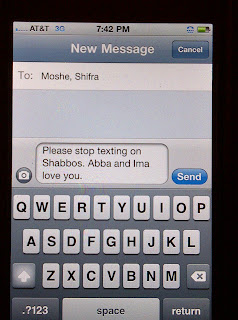 This is probably not a surprise, but I’m not in favor of “half-Shabbos”.  In fact, I strongly suggest that if you haven’t read Rabbi Maryles’ post on the subject from last week, then you should.

Of course, it’s not just high school age teens.  I know of twenty-somethings that do this, too.  Like germs, technology trends, fad diets, and a funny clip on YouTube… it’s everwhere.

If I found out that my own son or daughter was texting on Shabbos, I’m not sure what I would do (it would probably involved some screaming, sadly).  Most likely, I’d start playing the blame game.  It’s pretty easy to blame the school and the parents for not teaching our youth to appreciate the beauty of Shabbos.  It’s even easier to look at our shuls, Rabbanim, and community leaders and think that if there was more real leadership or a feeling of passion about Yiddishkeit then these kids would feel some busha about texting in parks or behind closed doors.  I’ve read about this in blogs for almost a year.  I’ve seen the comments, schmoozed with a few friends about this and there’s one question that I haven’t heard.

What were these people doing on Shabbos before they started texting and using their phone on Shabbos Kodesh?  Probably tearing toilet-paper, picking out the bad jelly-beans from the good ones, watching movies on Shabbos with their iPhones on Netflix (with headphones), chewing treif gum or even something worse.  The odds are that someone who is keeping “half-Shabbos” by texting has been involved in other less-headline grabbing aspects of chillul Shabbos for some time.  I know, you’re thinking, “You are right, Neil.  I’ve read countless articles in the Jewish Week, Jewish Press, Chicago Jewish News, and the Baltimore Jewish Times about so many high school age teens that are being rebellious by double-knotting their shoes on Shabbos.”  In fact, if we assur’ed lace-up shoes, then we could stem the tide of kids at-risk.

If we want to really isolate the blame as to why “half-Shabbos” has become a trend then we have to swallow the hechshared or other-the-counter-approved pill and look at the person reading this (I’ll take care of looking at the person writing this).  It’s us.

We are to blame.

If you choose to blame the schools or the shuls, then stop.  If you think the schools and shuls should be more involved in promoting the concept of Ahavas Hashem and the importance of building a relationship with Hashem then you have to be the one to discuss it with those people in charge.  If you think that parents who try to be friends with their kids instead of being parents are to blame for not being more aware of what their kids are doing, then learn how to approach the parents.  Now, it could be that parents and educators don’t have the tools needed to approach those that keep “half-Shabbos”.  Then we need to pull together Rabbis, educators, Kiruv-types, and adolescent psychologists to figure out a game plan.

I’m an optimist by default.  This “glitch in the matrix” is just that, a glitch.  This is just a trend.  We, as an observant community, have dealt with both youth and adults not keeping “full Shabbos” in the past.  In fact, Rabbi Yisrael Salanter encountered it when he moved to the port city of Memel of Lithuania, a community that wasn’t so into keeping Shabbos:

Reb Yisroel did not take a harsh, uncompromising stance against Sabbath desecration in that setting. Instead, he resorted to a soft, graduated approach. In his first sermon he explained the concept of Shabbos to the people on their level, concluding that chillul Shabbos at the port was intolerable because of the writing involved – the major Sabbath desecration of running a business. He did not discuss the actual portering of goods. Many agreed that they could postpone their writing until the weekdays, while the loading and unloading continued.

Some weeks later he suggested that without too much sacrifice, it should be possible not to send shipments, even if goods did arrive. Slowly this approach too became acceptable to the merchants. After a period of time, he convinced them that even the unloading was not vital – and the Jewish merchants of the city ceased all their port activities on the Shabbos. A revolutionized Memel emerged.  (From Tnuas Hamussar vol 1, page 186)

One of the many things to learn from the above story is that you can’t always have an “all or nothing” approach.  That doesn’t work all the time.  In fact, we don’t even need to look to a story about Jewish life in 1860, I can look to our times.  There’s a group called Reboot who started a campaign a few years ago called the Sabbath Manifesto.

It wasn’t started by a kiruv organization, an outreach yeshiva, or an umbrella organization that represents Torah Jews.  It was started by diverse group of non-Orthodox Jews.  They try to and have been successful in getting people to reduce using communication devices on Shabbos.  They even sell a cool sleeping bag to put your cell phone into.  The had a national day of unplugging in March and had thousands of people unplug from their phones for a Shabbos.

Most social trends like inter-marriage, assimilation, and substance abuse tend to start outside of our own dalet amos and eventually filter into our heimishe velt. Maybe trend of unplugging will reach those choosing to keep “half-Shabbos” and filter into our own heileigah homes and schools.

In the meantime, if you’re one of those who keeps a “half-Shabbos” then remember, you’re still half-way closer to “full Shabbos”.

* A special thanks to R Yitzchok Lowenbraun and AJOP for featuring this post in their weekly newsletter.