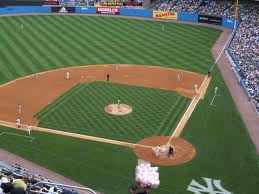 I am not a sports fan.

I could blame it on the environment I grew up in, since my hometown isn’t home to any professional sports teams. I was never particularly athletic, but did play some soccer when I was in elementary school. That, aside from posing as a skateboard, was the extent of my active involvement in any sports. Of course, I bike (for information about this and how to help me raise money for Chai Lifeline click here), but it’s more of a hobbie. My father a”h was an avid tennis player and golfer back in the day and he loved to watch college basketball, especially our local team, the Wichita State Shockers. We would attend many games during the season and always watch them on TV. As I got older, my interest in spending time watching games with my father dissipated, as I moved towards things like comic books, decisively counter-culture music, and Yiddishkeit.

My lack of interest in sports as an adult, you see, has nothing to do with religion or frumkeit. In fact, not being able to chime in about various sports news, scores, and game highlights is somewhat of a social damper for me especially during Kiddush on Shabbos. As I’ve posted before, my son (in 5th grade) is a huge sports fanatic. Aside from being fairly athletic (he gets this from my wife’s side of the family), he is a avid fan of professional sports. At White Sox games he has completely held his own when talking about plays with adults sitting near us and will even record games off the radio with his mp3 player so that he can listen to them if he falls asleep.

As a father I know and have seen how sports can be a “father and son” bonding thing. I make an effort to always find out the scores of games in the morning, so that I can tell him who wins and I often will be the one to give him a newsflash about when someone is traded from one team to another. My son understands that I take an active role in what interests him, even if I remain on the sidelines. Playing sports is more than just exercise, it builds teamwork, confidence, and teaches one to follow directions. As I have seen for the past few years in the little league that my son plays in, with the right role-models there are many opportunities to teach the importance of both good sportsmanship and also Kiddush Hashem (as in the real mitzvah of Kiddush Hashem, which classically relates to how other Jews see you).

After a recent little league baseball game my son’s coach emailed us about a decision he made towards the end of the game. I admit, I had to read it a few times and even wiki’ed a baseball term. It seems that the coach decided, “to walk one player from the opposing team to load the bases so that there could be a force play at every base in the event that the subsequent batter put the ball in play the ball in play.” As it turns out, my son’s coach “unintentionally violated the rules by ordering an intentional walk so there would be a force play at every base when the next batter came up to bat”, as he wrote us in the email. He concluded his email, which he asked us to read to our sons, with these words:

“As I have discussed making a Kiddush Hashem with the kids over and over, I feel that I may have done just the opposite. I take full responsibility for what transpired and as the coach of the team, I am fully accountable. Please let the boys know that I am sorry that I let them down and I will try to be better in the future. As role models, we can never let our desire to win supersede our obligation to act with derech eretz and proper respect for our fellow players.”

My son’s team has a fairly good record so far this season. There will be more games won and probably a few that he will lose, but this was a true win. I hope in the years to come when he sees his father make mistakes along the way or when he, himself, makes the wrong call at some point, he will be able to look at the intellectual honesty and Torah true menschlikeit that his coach demonstrated.