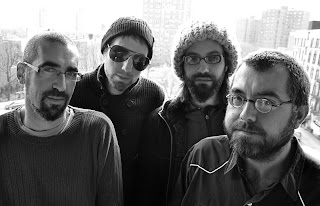 
Bridging the worlds of the orthodox and the avant-garde, Yoshie Fruchter and the acclaimed musical project Pitom draw on some of the hottest New York talents. With klezmer as the base, the group’s sound also incorporates elements of rock, jazz, and avant-garde genres. The soulfulness of traditional Jewish music fuses with the energy of jazz and sonic textures for an exciting and innovative brew that has set New York City ablaze. With guests: Yuri Lane and Black Bear Combo (Balkan)

“More than most of the bands on John Zorn’s Tzadik label, Brooklyn’s Pitom understands that rocking is something you can’t annotate… Pushing the whole thing through the scales and melodies of frontman Yoshie Fruchter’s Jewish heritage-if any band can walk the talk of the word “radical” in the phrase “Radical Jewish Music,” it’s these guys. Fruchter is equal parts seminary school, jazz school, and Nirvana’s “School,” doing the same for heavy metal that Zorn’s Masada did for free-jazz.”  –Village Voice
“Fun, loud and well-played…” TimeOutChicago
“Incredibly creative, remarkably capable, and gutsy band that takes musical risks in stride.”  JazzReview

I got their new album, it rocks and is great to listen to while biking.

1 thought on “Pitom to play this Motzei Shabbos”