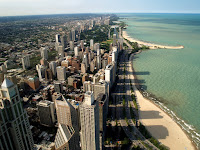 Ok, after almost 4.5 years I think I’ve begun to feel like a Chicagoian.  From my days as an NCSYer, learning in E”Y, YU, and then working professionally for NCSY I’ve always been friendly with people from Chicago.  Having a core group of families that we were close here was a major draw to our choice to move here.  That being said, many people from Chicago who move to the East Coast have an almost hypnotic tranced induced manta that “Chicago is the best city”.  I use to just shrug them off and smile.
I won’t even touch the inyanim involved in the machloches, but I will say that reading some of the comments regarding this post at Beyond BT, I am very proud to live in Chicago.  I still call soda “soda”, I only refer to Skokie “Yeshev’vah” as HTC, I have figured out what “kitty corner” is, and I know what a “gapers delay” is.

Base on the above linked post I’d like to offer a few local links that might be helpful to people.  These are in no particular order whatsoever. 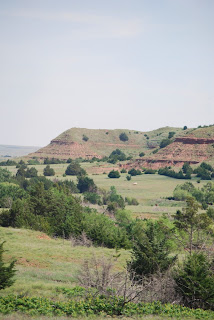 My parents use to love taking my brother and I for day-trips on Sundays, when we were in elementary school.  Mostly these ended up in small towns in Kansas, towns with one grocery store, one gas station, and only one place to eat.  A few times during these Sunday drive we would end up about  80 miles Southwest of our home in Wichita, Kansas at a place called the Gypsum Hills (or the Red Hills).
For a little kid it was cool.  We’d ride in the car “forever” and then get out and run around, climb hills and collect pieces of gypsum.  Good times!

What I realized when I was much older was that my parents weren’t just coming up with crazy day-trips to keeps up from watching TV all Sunday.  They were attempting to expose us to different scenery from the typical flat-lands of Wichita.  It’s the same reason that we went to “young peoples” symphony concerts, art museums, and hung out all week at Riverfest (there are plenty of life lessons to be in watching a bath tub boat race).  It wasn’t just exposure to culture, but a desire to give us a broader picture of what life had to offer.  My mother, who grew up in Dallas, TX, and my father a”h, who grew up in a small town in Western Pennsylvania wanted to give us an appreciation for the arts and nature.  My brother, as a result, became very attached to nature, while I ended up spending many afternoons at that MoMA.

The underlying theme of these Sunday trips and countless schlepping to various locations was that giving us a view of the “bigger picture” was a good thing.  Today, as a parent of a daughter who is almost 4, a daughter who is a 3rd grader, and a son who is a 5th grader, I see the importance of this.  Letting my kids see the bigger picture is key.  It helps to give them a frame of reference (and reverence).  That’s why I try to point out when someone does a Chessed (kindness) for someone else or when I see an older man or woman davening with real kavanah (concentration), a person who gets new eye glasses l’Kavod Shabbos Kodesh, or an individual who has daily challenges and still remains postive.  Those are things that I value.  I’m not anti “the arts” nor am I against showing my kids the beauty of Hashem’s world, we do those things, too (mostly as age-appropriately as I can).

I think most parents want the best for their own children and attempt to give them/expose them to ideas and values that are dear to them.  As I get really to start a New Year, I hope that what I show my children (via my own behavior) things that can have a positve impact on them. 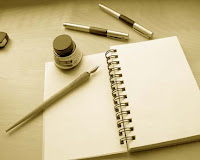 On the way home from work last night, I heard on the radio that keeping a journal can be healthy. Of course, this would apply for keeping a Cheshbon HaNefesh, too.

To hear this “Healthy Minute” from WBBM (CBS-Chciago) click the link below:
The Healthy Minute For August 26th « WBBM Newsradio 780

The blogger CJ SRULLOWITZ wrote a must read post about the ripple effects of the economic situation in the frum community.  It can be read here. 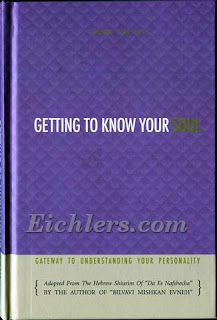 The writings of our Sages, which reveal various faculties of the soul, help us to take a deeper look into ourselves. We can align our personalities with the will of Hashem through in-depth study and understanding of these faculties, which are common to all people. This sefer has two sections. The first explains the elements of fire, wind, water and earth which correspond to the four fundamental traits in the personality. The second section explains the 13 basic faculties of the soul.

The book is currently available online at Eichler’s.  In fact, my wife just bought a copy for me today in Brooklyn.  🙂

When one reaches Elul, ok when I reach Elul, I usually attempt to figure out what I didn’t work on so much during the year. I look at my Cheshbon HaNefesh (I actually keep one online at http://www.joesgoals.com) and see what my “issues” and things I was struggling with were during the year and where I fell short. R Yerucham’s approach seems different. By focusing on our virtues we not only build up our confidence, but also become more aware of exactly what gifts Hashem decided to specifically give us. This idea is very in tune with the whole “Galus HaAdom” approach of Slobodka, finding the greatness within.

I think that using Elul as a time to bring out my strengths can only help me.  Usually my Elul is sort of a cannonball into a pool of introspection followed by endless laps by way of the Tikun HaMiddos stroke.  Using what virtues I might have to augment those things that I’m weak in brings me to the T-shirt.  Each of us has a “virture” or something that we are fairly good at.  If you don’t want to feel like a baal guyvah, then just accept that someone close to you feels that you are probably good at something.  Our goal is of figure it out and use that as a springboard in other areas.  Look at the T-Shirt below and think about how you would fill in the blank. 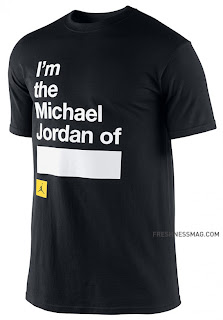 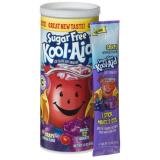 As I write this, there are a few tears in my eyes. I guess this the the postive side of a flashback. Since my father a”h has been niftar I’ve become a fan of sugar-free grape drink mixes. One of the many things that I didn’t find out about my father until after his death, was that he loved sugar-free Kool Aid. In fact, I just made a cup.

As I kid I remember making it at home, but my mom wasn’t a big fan due to the potential of massive stains on carpet and clothing. Since finding out my dad liked it and trying it myself when I was sitting in Wichita, KS, I’ve been buying it. My dad made it “by the pitcher”. I’m more into the single serving packets of either the Target or Walmart brands. Both are pretty good and you can also get the “white grape” which still gives you a pretty good grape taste, but if you drip it on your shirt it doesn’t really leave a stain.

So why am I misty-eyed? I made my bracha on my drink and took a sip. As I was drinking it I began to think about the fact that on some level my father a”h probably got some zchar for drinking this kosher item. My father a”h, wasn’t observant. He was raised fairly traditional, reguarly attended services on Shabbos and was always available to help with a minyan. My flashback, in this case, is all of the times he drank and ate kosher while visting me.

The lesson is in this, if anyone is actually reading this post, is that despite differences, friction, arguements, theological discussions, stereotypes, etc. that one may have to deal with with relatives who might be of “lesser observance”, the silver lining might be a shared bag of pretzels or a beer. Other times it might be you actually learning a thing or two, like the fact that sugar-free Kool Aid is pretty tasty.

I have listened to music for years for years. My first 45 that I owned was “Hey Jude” with “Revolution” as the B side. I heard the song on the radio when I was like in pre-school or kindergarter and a few days later my parents got me the single. It was so cool. The first cassette (ask your parents, if you don’t know what one is) I owned was the Gene Simmons Kiss solo album. It was glorious. Then came hours upon hours of making mix tapes, finding bands to listen to and making music into a lifestyle and as a way to relate to the world.

The point is I have lyrics and tunes stuck in my head. It makes no difference how much MBD, Piamenta or Uncle Moishy I listen too, these songs from my past are still floating around my skull.  Since my father a”h  died, the lack of listening to music has sort of brought out audio fashbacks.  For a while on Facebook I would post what combinations of songs (sort of an aveilus mega-mix) were going through my head on any given day. This got even more of a problem when I would go biking at night.  I’d mentally play, hum and sing songs in my head, because I just didn’t get that jumpstart of energy listening to shiurim.  I’ve come to realized that you can’t quite the music, even if you’re not listening to it.

Most of us can’t help it if we have music in our heads. A random phrase said at work will trigger a song lyric in my head. That’s how it is. A number of months ago I had oral surgery before Shabbos. I was on some fine pain killers and when walking to shul Shabbos morning several songs from my punk past popped in my head. I couldn’t get rid of them. Maybe it was the pain pills, maybe it was the several l’chaims after shul, but eventually they left my head. That’s one type of flashback.

Then there’s the opposite type.  It can happen when in shul during Mussaf of Yom Kippur or during a “stam” Shabbos.  I’ll hear the chazzen/baal tefillah start singing a particular tune and it will automatically bring me back to my high school days, as well.  I’ll instantly be sent to a Shabbos afternoon spent keeping Shabbos with 100 other teens at an NCSY Shabbaton.  I will recall how much I hated, and I usually don’t use or write this word, the idea of Shabbos ending, amid a medly of emotional songs composed by Abie Rotenberg and Avraham Fried.

I’ve also seen in myself, how easy it is to let music help express or direct what mood you are in. That’s probably a heathy side-effect of not listening to music during various times in the Jewish calendar and while mourning. It’s easy to get out of a bad funk by simply clicking a song in your iTunes. It’s a crutch, especially when you don’t really want to deal/express/accept certain feelings.  Not having that niggun or guitar solo to listen to forces you to relate and express yourself.  I’m sure that given some time I could come up with a slick song lyric it quote from someone as far removed from our religion as possible, but I’ll turn to what’s currently in my head written by Shlomo HaMelech, sung by D’veykus:
Everything has an appointed season, and there is a time for every matter under the heaven. (Koheles 3:1)