… my kavanah for every bracha was on the level it was when I made a shehakol for my iced coffee at work this morning, after not having coffee yesterday.

Rabbi Yisrael Salanter
“The test of whether Mussar is being studied properly is whether it evokes a desire to continue learning Mussar.”
From Sparks of Mussar by R Chaim Ephraim Zaitchik

Please take a minutes and read this article. For something like this to be happening is simply wild.

Film producer Wendy Weiner Runge claims that criminal charges brought against her as part of an investigation into alleged abuses of Iowa’s film-tax-credit program may be motivated in part by anti-Semitism. 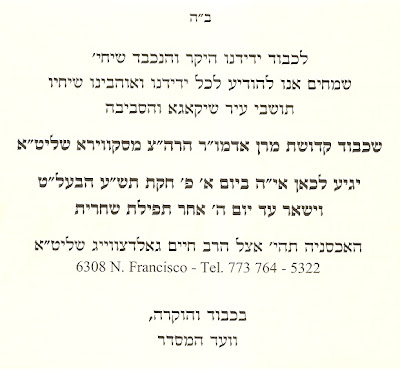 
Since it as Shabbos Rosh Chodesh last Shabbos, I got a wonderful package sent to me from the Rebbe shlita.  It was a beautiful and extremity tasty Challah and an onion kugel and a luchson kugel.  It was a great surprise to me an my family and a real chessed.  I felt truly honored that the Rebbe shlita remembered me.


To read about the last time the Rebbe shlita, came to Chicago, click here.

His disciple, Rav Simcha Zissel testified: “Our master, of blessed memory, lit up the eyes of the exile with his investigations and knowledge in the laws of money, theft and damages.  In this he was unique in these generations.”

A short d’var Torah on Korach that I submitted to my shul’s Torah blog was posted here.
It was written in merit of a refuah shelaima for Esther bas Sara.

The former Chief Sephardic Rabbi of Eretz Yisrael (know as the Rishon l’Tzion) Rav Mordechai Eliyahu was niftar on Monday, June 7th (yesterday).  I’m not Sephardic, but he was a true Talmud Chacham and an Adom Gadol.
I was zoche to have not only met him once, but daven with him (well, in the same shul) and even had a lunch on Sukkos with him.  In 1989/90 I spent my first year learning (if you could call it that) in E”Y.  A close friend of mine came in for Sukkos and we stayed in his apartment, which was several flights above the Rishon l’Tzion’s in Kiryat Moshe.

My friend, who is Sephardic, and his family were actually very close with Rav Eliyahu and we were invited to come downstairs to his sukkah for lunch (on what was my first day of Yom Tov).  Throughout the meal he welcomed guest after guest, it was non-stop.  He was friendly and truly “received everyone cheerfully”.  For me it was a fairly quite meail, since I wasn’t fluent in Hebrew.  Rav Eliyahu’s wife offered me a side-dish, I think it might have been some type of spicy carrots and I thought I would be super-slick and decided that I only wanted “a little”, so I proudly said:  Katan, b’vakasha.
She smiled, realizing that I REALLY didn’t know Hebrew and she attempted to explain to me that I should have used the word “ktzat” instead of “katan“.  I sort of got the drift of what she was teaching me, but more importantly, I wasn’t embarassed or made to feel like I knew nothing.

After lunch Rav Eliyahu had someone go into his living room and bring out a beautiful book with amazing photos of different shuls in E”Y. The Rishon L’Tzion then had me sit next to him and he spent about 20 minutes going through the book with me and telling me the locations of each shul.  I felt so honored that he would invite me into his sukkah, let alone spend his precious time with me.  Despite the language barrier between us, the sensitivity and creative way he used to engage me as stayed with me over the years.  My oldest child knows this story, not because his abba once had a meal with the “Chief Sephardic Rabbi”, but because it illustrates true Gadlus in how to interact with a person and make them feel special.  That, to me, is one of the traits of a true Adom Gadol.


“Someone who cannot shut down a yeshiva cannot open one either.”
From Sparks of Mussar by R Chaim Ephraim Zaitchik 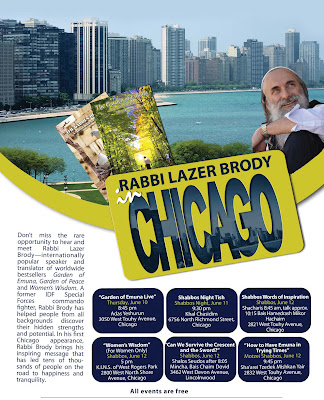 For more information call 773.209.6656 or email: sseimb26@gmail.com
To read my thoughts on learning
THE GARDEN OF ENUNA, click here.
After weeks of training, a few late nights and the realization that I’m not as young as I use to be, I biked with Chai Cyclists as part of Chicago’s Bike the Drive on Sunday.
I started biking at 5:40 am and finished at 9:15 am.  The weather was perfect.  It was hazy (the sun didn’t really start shining until 9:00 am) and 66 degrees when I started. Unlike last year, there was very little wind, which made things great.  I was, thanks to my hours and miles of training, able to bike at a rather steady pace, stopping every every 15 miles to refill my water bottle with Crystal Light packets.  Things were going well until the  last 7.5 miles, then I began to get a little tired.  OK, really tired.  Of course, others were biking too and I knew that I was almost finished. I kept going, like a man on a mission, and finally made it to the end.
Throughout the ride I was listening to shiurim (all available to download by clicking the links) and was able to get through a shiur on the history of the Slabodka Yeshiva, a biography of  Rav Yitzchak Hutner  and a discussion on Perfection in Human Relations.  What Torah I was able to learn was in memory of:
and as a refuah shelaima for:
At  Grant  Park, where the event ended, we were greeted at the Chai Lifeline tent  by their staff and a nice breakfast of cream cheese sandwiches, pastries and orange juice (I was too exhausted to eat, but the orange juice hit the spot).  Also, at 8:00 am I was greeted at Buckingham Fountain by my brother, who had come from out of town for the event and to cheer me on.
After the ride my friend that I’ve been training with and I (along with my brother) went back out our home where we were given the welcome of a lifetime.   My friend’s had come over and all of our kids had lined up in the front yard and made a paper-link-chain for us to cross.   My daughter in second grade had even made a picture for me of a trophy and written “#1” on it.  My wife, who is my biggest supporter, had made an awesome celebratory breakfast of champions that included: bagels, lox, cream cheese, scrambled eggs, whole wheat pancakes and coffee.  I mostly drank and had a bagel later in the afternoon.

After resting for some of the day, we all drove to Six Flags, since the kids didn’t have school on Memorial Day, and hung out for the evening.  It was a great way to end perfect day.

I biked a total of 45 miles (I tied with only one other person for the the longest distance biked) and my sponsorship totaled over $2,800.00, which was the highest amount raised in Chai Lifeline’s Bike the Drive history…thanks to all of my sponsors.

As I had previously written, I dedicated this year’s ride to the memory of my father, Al Harris a”h, who passed away in early November.  He not only sponsored me, but was always amazed by my commitment to Biking the Drive and was very proud of my efforts both in terms of biking and also in attempting to help an important organization like Chai Lifeline.   I know he would have been very proud of what was accomplished on Sunday.

For those of you who sponsored and encouraged me, thank you!!!