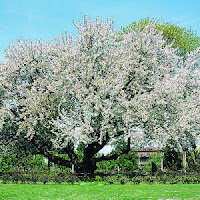 From the Chicago Center for Torah and Chessed
Below is an updated list of trees available to say Birchas Hailonos on. We are also enclosing a summary of the halachos pertaining to this special once- a – year bracha, prepared by Horav Doniel Neustadt.

Northeast corner of Monticello and Rosemont

2725 W. Birchwood in yard. Pear tree-can be seen from alley

Next to Sephardic Center on Touhy. Pear tree.

One house south of Pratt, east side of Kimball at the alley. An apple tree is on privately owned property but large branches hang over the alley. Usually blooms late April to early May, with apples visible in June.

Northwest corner (on parkway of Crain St.) of Crain and Hamlin- Greenberg

Southeast corner of Monticello and Crain. A few fruit trees.

BIRKAS HA-ILANOS: THE BLESSING OVER TREES IN BLOOM

Rosh Chodesh Nissan marks the beginning of the season for Birkas ha-Ilanos – the blessing we recite upon seeing fruit trees in bloom. Since this blessing, which extols Hashem’s ongoing renewal of creation, is recited only once a year, its halachos are difficult to remember. Women, too, may recite this blessing since it is not considered a “time-related mitzvah” from which women are exempt.

THE TEXT OF THE BLESSING:

WHEN IS BIRKAS HA-ILANOS RECITED?

The l’chatchilah, preferred time to recite this blessing is immediately upon seeing a fruit tree in bloom during the month of Nissan. Most poskim agree that the halachah mentions Nissan since generally, that is the month in which trees begin to bloom. Accordingly, in an area where they start blooming in Adar, or where they do not bloom until Iyar or Sivan, the blessing should be recited in those months. In the countries where fruit trees blossom in Tishrei or Cheshvan, the blessing should be said at that time.

If a tree bloomed in Nissan, but one did not see it until later, he may recite the blessing the first time he sees the tree as long as the fruit of the tree has not yet ripened. Once the fruit has ripened, the blessing may no longer be said.

The blessing is said upon seeing the actual blooming (flowering) of the tree. The growth of leaves alone is not sufficient to allow one to recite the blessing.

The blessing may be said at night.

The poskim debate whether one is allowed to say the blessing on a tree which has been grafted from two species, since the halachah does not permit such grafting. It is preferable not to make the blessing on such a tree.

During the year of shemittah in Eretz Yisrael, it is permitted to recite the blessing even on a tree which – in violation of the halachah – has been cultivated.

There are several hiddurim mentioned in the poskim concerning this once-a-year mitzvah. According to the kabbalah, especially, this blessing has special significance. Among the hiddurim are:

The blessing should be recited on two or more trees. No blessing is said on a single tree. Although the two trees do not have to be from two different species, several poskim mention that the more trees the better. Indeed, l’chatchilah the blessing should be said on trees in an orchard that is planted outside the city limits.

The blessing should be recited in the presence of a minyan followed by Kaddish. Before the blessing is recited, V’yehi noam followed by Hallelukah hallelu Keil min ha-shamayim is said.

The blessing should be recited at the earliest possible time, which is on Rosh Chodesh Nissan, unless it falls on Shabbos or it is raining.