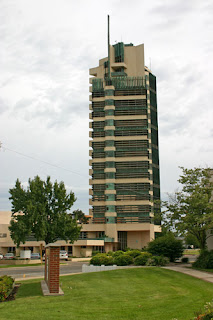 Photo of the Price Tower from Wikipedia
Nisan (aside from being my Hebrew name) is the month of that Hashem revealed himself.   From a mussar point of view, there’s the whole chametz = Yetzer Hara, soul-searching thing that some of us might undergo.  It’s also spring cleaning, when we go though closets, boxes, and even old posts that have been sitting in Blogger Dashboard’s as drafts.  This is not one of them.

If I was a sports fan, I would write about how working on bettering yourself isn’t really for a Monday morning quarterback.  I, however, did spend way too much time in high school listening to what use to be called “college radio”.  The phrase “Building towered foresight isn’t anything at all” has been buzzing in my head for weeks.   Mostly because while working on several middos (derech eretz and emes) that involve interactions with others, I’ve come to see that it’s really easy after the fact to say, “I really should have handled the situation better”.

Navigating how to approach people requires being able to have the creativity to come up with multiple outcomes of possible reactions.  To only have a perspective to see one outcome or “Building towered foresight” might make you feel that you have achieved the right goal of your avodah on a middah, but I think only seeing one outcome limits you.  When speaking with family members, co-workers, or teachers it’s important to try to see several possible outcomes and adapt as needed.

This is also true when dealing with one Yetzer Hara.  No chiddush here, I just happen to be re-reading The Juggler and the King for the first time in about 17 years.

1 thought on “Building towered foresight isn’t anything at all*”