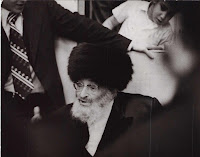 Matzav has reposted an older article from the Yated about the life and impact of Rav Yitzchok Hutner zt”l on of several Slabdoka talmidim who change the yeshiva landscape in America.

Jewish Action also had a great article a number of year ago, here.

Rabbi Hillel Goldberg writes in his book Between Berlin and Slobodka that R Hutner was one of the first Roshei Yeshiva in America to start giving shiurim in English.  I think this is a valuable lesson.  An effective teacher is one that uses language in a way that student can understand.  It doesn’t mean that you have to know the most current slang or newest entry in the Urban Dictionary, but the message you give over has to in a form that can be received.

You can feel free to read other post of mine that site Rav Hutner here.