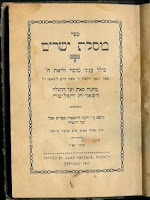 Recently, in what started out as a casual (not that I really believe in these things) conversation with the head of local adult education program, I was asked what I’m my interests are in regard to learning.  I mentioned that I  ‘enjoy’ mussar and had for many years.  I was then asked how I got “into Mussar”?  I smiled and responded that it was more like mussar got into me.


This conversation brought me back to what I might loosely call a “defining moment” in my Yiddishkeit, while learning in Israel in 1990.  I had spent my freshman year at YU and now I had an opportunity to actually learn Torah “all day” for the upcoming year.  It was the end of my first day in a yeshiva in Israel, and our Rabbeim had left for evening, thus leaving about 40 fresh off the plane guys in the beis medresh with several of our madrichim and a few kollel-types.  On the schedule was something called “Night Seder”.


I’ll be honest, I had no clue what this was.  A nice amount of guys left our yeshiva (which back then was in Gilo) and took a bus into town.  The dozen or so left sort of just hung out.  I looked around and saw that a few people were learning b’chavrusah and some were just “reading”.   I decided to start checking out the books in the yeshiva’s small library.  I happened upon a small book called “The Path of the Just” .  I had never heard of it (not that I really had heard of much aside from Rashi, Rav Hirsch, and R Aryeh Kaplan) and decide to pick it up.

As most people, the first sentence hit me with its’ humility and deep insight into how to open up to someone:

“I have written this work not to teach men what they do not know, but to remind them of what they already know and is very evident to them, for you will find in most of my words only things which most people know, and concerning which they entertain no doubts.”


I had always been interested in psychology and why we do what we do.  That aspect of insight in the life of a Torah Jew was, as a 19 year old, something that I hadn’t formally come accross during my development in Torah observance.  The whole idea of becoming a better person was an area of Judaism that I had thought about but never really read anything about, until now.  I felt my world sort of opening up and I quickly began to see the “bigger picture” of a whole different aspect of Avodah.  It was a classic Peak Experience,  as Abraham Maslow would have put it.


Eventually when I reach the end of this sefer I was again, amazed.  It ends with this pasuk from Tehillim:

“Let Israel be happy in its Maker, the sons of Zion rejoice in their King” (Psalms 149:2)


The end result of growth should be that we have a relationship of simcha with Hashem.  Simple, yet deep.  That evening and the subsequent ones spent reading and learning Mesillas Yesharim with several different people helped give me an anchor and a direction that I hadn’t thought possible. As I look back, it may have been a defining moment for me.

1 thought on “A defining moment”