If brevity is the soul of wit, then do you see the humor in this post?

The Kotzker Rebbe, zt”l, remarked that he learned life-long lessons from the Mishnah in Bava Kama 26: “אדם מועד לעולם”— “Man is always responsible for his actions.” He was careful to never damage any property whatsoever.[1]

The Kedushas Tzion of Bobov, zt”l, explained, “A more perfected person purifies himself to such a great extent that he never makes a move without hisbonenus, without carefully contemplating his actions. It follows that such a person will never cause damage.”[2]

Rav Shlomo Zalman Auerbach, zt”l, was just such a person. One Shabbos, when one man arrived in shul without his glasses, the Rav approached him and asked if was refraining from carrying his glasses on Shabbos.

Rav Shlomo Zalman was astounded. He wondered aloud, “How could you have broken your glasses? Do you see my glasses? I have had this pair for decades. Every night I place them somewhere where they cannot come to harm, so how could they possibly break?”

On another occasion, he had a student at his home. The young man was a bit preoccupied, and since he was not paying attention to his actions, he broke a glass.

Rav Shlomo Zalman smiled at him good-naturedly and remarked, “Do you know? I have never broken a glass in my whole life.”

He explained, “I don’t say this because I care about the glass. I point this out because a glass if for drinking, not breaking.”

Rabbi Golshevsky’s blog, A Fire Burns in Breslov, can be found here.

If you see that someone came to the station after the train he wanted had already left, do not say that the man was late and missed his train, but that he cam early for the next train.  For everything is in the hands of Heaven.

Tonight marks the 55th Yartzeit of Rav Eliyahu Eliezer Dessler.  I could write a lengthly post about Rav Dessler and the impact that Michtav Me’Eliyahu has had and continues to have on this blogger, but I won’t.

Firstly, at this point, I don’t feel that I can do justice to the memory of Rav Dessler.  Secondly, as important as the Torah was that was taught by Rav Dessler, the example he set by being a ba’al Mussar might even outflank the galdlus of his writings.  He lived in an era when teaching Torah wasn’t just confined to the walls of the yeshiva or classroom.  Torah was who he was.  There was no issues of guy’vah or kavod when it came to Rav Dessler, only anavah.  Maybe it had to do with his chinuch and his family history (he was a great-great-grandson of R Yisrael Salanter)?  I tend to think that back then kavod wasn’t what mattered.  What mattered was what you had learned and how you applied that learning.

This example is from the wonderful biography of Rav Dessler by R Yononson Rosenblum:

Sunday morning, the day of the levayah [for his wife], Rabbi Dessler was found polishing his shoes.  Rabbi Dessler explained, “She was always meticulous that my clothes shoudl be spotless before I left the house, and now I’m fulfilling her will.” (based on a page 340)

It wasn’t just that that was the way he and his wife were taught in Kelm.  It was the way his wife wanted him to be.  That the image you project on the outside is only a reflection of the inside.  Maybe that is the emes that Rav Dessler taught us to strive for.

It didn’t happen overnight.  It was a gradual change.  The essencials that made up who I was seemed to slip away.
An ambush, probably.  A covert operation, if you will.  I couldn’t really say when it first happened.  I do know that at somepoint I did or said something and realized that “this isn’t me.”
On of the biggest weapons of the Yetzer Hora is to make us forget who we are.  It could, in fact, be the biggest Yetzer Hora out there.  This mode of attack is based on making us forget or become desensitized to the fact that each of us are a child of the King of Kings.  This happens when we become to comfortable with ourselves, our abilities, and our hopes.  It’s an attack that hurts, an attack that confuses us (which is the main goal of the Yetzer Hora) from different angles:  our goals, our motivations, our enthusiasm, and our accomplishments.
And to make things worse, when this happens to me and I reflect on it (after the fact) I’m almost impressed with the tactics used by this Yetzer Hora.  It’s not that I forget about the King, chas veshalom, because that would be too easy.  No, it’s not an attack against Hashem.  It’s simply forgetting that I’m the son of the King.  It’s the impression that I have no connection or invitation to the Kedusha, the Torah, or the Mitzvos that Hashem created for me.  That’s the knock-out punch.
*Photo from selfdefensetalk.com

“Blessed is the man who relies on G-d.”  The blessing is that not only does he receive his material needs, but he also binds himself to G-d though his bitochon. 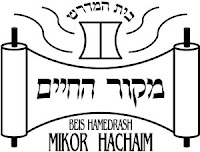 January 16 and 17, Parashas Shemos
Rabbi Brazil will be leading a spirited Kabbolas Shabbos Friday night at Mikor.
Later that evening, there will be a tish at the home of
Rabbi and Mrs. Avi Banker, 2907 Coyle, beginning at 8:30PM.
The Mikor HaChaim Shabbos of Chizuk continues with
Shalosh Seudos at Mikor after Mincha at 4:20.
Motzaei Shabbos there will be a festive Melave Malka with Rabbi Brazil at the home of David & Chaya Tova Hartman, 6137 Bernard , beginning at 8:30 PM.
All are invited to enjoy the Torah and nigunnim of Rav Shmuel throughout
this amazing Shabbos of Chizuk!
Note:  I have written about this before, but in 2005 I was zoche, thanks to my mother-in-law a”h, to daven on Simcha Torah in Sh’or Yoshuv and hear Rabbi Brazil daven a beautiful Hallel on Simchas Torah morning.  It was 45 minutes of pure joy to my ears and neshama.  It remains to be one of the highlights of my adult life.  Even though the weather will be below freezing, Rabbi Brazil will warm you up! 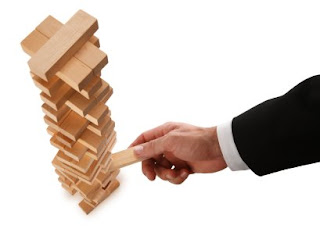 (Photo from Fractal Press)
Games.  Some people love them and others can’t stand playing them.  I like some games (like Blokus, Go, Nok Hockey, and the song “Games” by Husker Du), but I’m not a fan of people who play psychological games with others.
I do like Jenga.  I’ve liked it since college.  I like the fact that you can play it with a group and that you can even just play with it alone and it’s just a challenging.  I have found two very important Mussar lessons in playing Jenga.
Firstly:  Every action we do has an effect.  The effect can either be to build or knock down.  This is very true when it comes to what we say to people and how we act.  A smille, kind word, inquiry into how one is feeling, or simply saying “Hello” can have a major impact on someone.  A simple action on a Mitzvah level has untold effects both in this world and the next (this book is a prime example).  A negative look or remark can destroy even the strongest person.
Secondly:  Even if something topples or gets knocked down, you can start again.  That’s
what Teshuva is all about.  It’s not the end of the world if the game ends or right at a critical point in a high pressured game of Jenga with your older kids your 2 yr old uber-toddler decides to “touch the tower”, and it all comes falling down.  It’s just a game.  You can just start over and maybe the next time you’ll win.

Am I reading too much into a simple game of Jenga?  Probably so, but I’m always looking for a lesson to learn in everything.

If anyone is interested in putting it to music, email me and I’ll put you in touch with “my people”.

Over the weekend several shuls in the Chicago area were vandalized.  You can read about it here.

This was sent out by several Rabbis in the Chicago community:
In response to the vandalism community will be gathering today to show our support and make our voices heard – not only that we are ONE PEOPLE together with Israel, but that we will not stand for such cowardly acts of violence.
Please make every effort to join us at
Lincolnwood Jewish Congregation
7117 N. Crawford Avenue,
Today – Sunday, January 11th – 3PM
(The gathering will last approximately one half an hour.)

Update:  For coverage of the event today see this.  I, along with about 300 others, attended the outdoor event it was a very nice showing of both obsevant and not-yet-observant Jews and even some non-Jews.  Several rabbonim were present and there was a lot of media coverage.