I had jury duty a few weeks ago. While I’m all for doing my part to help our country’s legal system, I also figured it would be a good time to make some progress in a few things that I have been learning. As I was trying to decide what reading material to take with me I ended up with really two choices: Rambam’s Hilchos Teshuva or the second volume of Bilvavi Mishkan Evneh. I was already on the 6th chapter of Hilchos Teshuva (I usually start learning it a few days before Elul, and sadly, in 12 years I have only finished it 3 times) and was on the 3rd chapter of the Bilvavi.

As I was past the half-way mark with Hilchos Teshuva I opted to bring that sefer. Arriving in the jury room and 9:30 am and remaining there until past 4:00pm (no, I wasn’t picked to be a juror) gave me ample time to really jump into the Rambam in a way that was much more fullfilling than my past attempts. The time also allowed me to look around at my fellow civic-minded citizens of Chicago and see what they were doing.

Many were reading, watching movies on laptops or their smartphones, listening to music, taking naps, and taking naps. One “youth minister” seated close to me was working Sunday school lesson plans. He actually asked me about “Joseph’s relationship with his brothers”. All the while, the words of a very wise and close friend of mine, echoed in my mind, “How we use our free time really defines the type of person that we are”.

I was very glad that I had chosen to attempt to learn. That gladness was supercharged when I read the following from the 10th chapter (halacha 2) of Hilchos Teshuva:


Anyone who serves out of love and occupies himself with Torah and mitzvot and follows the ways of wisdom should not do so for any earthly reason[s] or out of fear of the curses or to receive the blessings, but should fulfil the truth because it is the truth. Out of this he will receive goodness. This level is a very high one, and not every wise person attains it. This is the level of Abraham the Patriarch, whom God called His `friend’, for the reason that he served God solely out of love. This is a level which God commanded, via Moses, us [to attain], as it is written, “And you shall love the Lord your God”. Once a person loves God appropriately, he will fulfil the commandments out of love.


While probably obvious to most, I was amazingly joyful to read the words of the Rambam.  As I had almost reached the intersection between Cheshbon HaNefesh and “will my Teshuva be enough this year”, I found was reminded by the words of the Rambam something that I had forgotten along the way.  Advodas Hashem m’Ahava is really the best path to take.  As I reflect on this, it makes perfect sense.  I know that I’m more touched when my own children listen and do what is expected of them because they love me, instead of because they fear what might happen to them if they don’t.  Again, it’s a simple thought, but one that I needed to be reminded of.

As I go into the Yom HaDin, I’ll attempt to put a lot more Ahava into my Avodah!

On the eve of Rosh Hashanah, Rav Yisrael Salanter would instruct each member of the family how to behave.  He would warn them against getting angry and against idle conversation, for they were all in grave danger.  Their carefulness was to last at least through the morning when the judgement is strictest.

Someone once left a coin on the window sill in Beis HaTalmud, and it remained there for many yearss.  No one touched it. 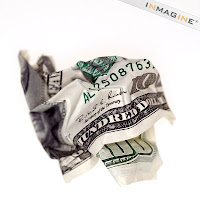 (Photo from inmagine.com)
I was able to hear R Heshy Kleinman, author of the PRAYING WITH FIRE series, twice today.  Tonight he shared the following idea and story:
People often approach davening and the High Holidays and feel that they are not worthy of praying to Hashem.  They have made mistakes during their life or during the year.  They have done actions that have distanced themselves from their creator.  Let’s hear a story.
There was once a famous speaker who, before his offical speaking engagement would begin, would stand in front of his audience and hold up a $100 dollar bill.  He would then ask the crowd, “Who wants $100?”
Everyone would raise their hands and, of course, respond.  Then he would fold up the $100 bill and ask the same question.  Again, everyone in the crowd would respond in the positive.  Finally, he would take the $100 bill crumple it up, step on it and smash it.  The speaker would then, one last time, hold up this dirty $100 bill and ask, “Who wants $100”?  The entire audience would raise their hands.
You, see, no matter how used and abused a $100 bill is, it still never loses it’s value.  Each of us, explained Rabbi Kleinman, has an natural value.  We are each created in the image of Hashem and we each have a powerful connection and relationship with Hashem.  Our tefillos will always reach HaKodesh Baruch Hu, regardless of what we have done in our past.  Our value to Hashem can never diminish.

“Run, run, run as fast you can!
You can’t catch me,
I’m The Gingerbread Man!”

Recently while returning a copy of the Gingerbread Man to the library I skimmed through the book. It had been years since I had heard/read the story. I, at first, felt bad for the the Gingerbread Man. He wants to live a life of freedom, like other human beings. He makes a great escape and after a furious chase he eventually ends up being eaten by a fox.

Maybe its just a feeling of being out of sorts lately or the excitement/responsibilty of Elul, but I can see myself (at times) as a Gingerbread Man…of sorts.  What I mean is that the Gingerbread Man makes the mistake of thinking that he is meant for something greater than his potential.  He tries to fight the natural outcome of being a Gingerbread Man.  Despite some couragous antics and thinking that a fox will save him, his destity or Divine Providence is to be eaten.  His nature, that of being a cookie to be enjoyed with a bracha before and after, is the sole purpose of his existance.

There are times that I’ve gotten trapped into the reverse mentality of the Gingerbread Man.  While he, in his crispy-on-the-outside-and-soft-on-the-inside-greatness doesn’t realize that to go beyond the limits of his potential is futile, I can count the times that I have limited my own potenial own based on what I think that I cannot achieve.  When I think about what I could have done at several key points in my life I know that the only thing that stopped me was…me. 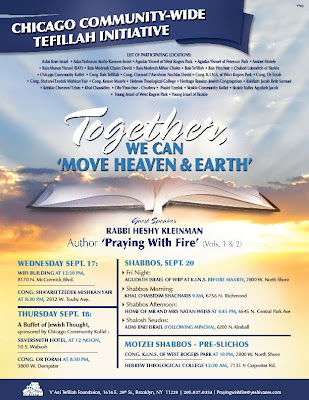 Rabbi  Heshy Kleinman, author of the Books PRAYING WITH FIRE (vols 1 and 2) will be in Chicago this coming week.
These shiurim are in conjunction with the Chicago Community Wide Tefillah Initiative.

A visitor forget his cane in Beis HaTalmud (the Alter’s yeshiva in Kelm).  When he returned for another visit thirteeen later, having lone since despaired of recoving the cane, he found it hanging in the same spot where he had left it.


R’ Simcha Zissel also instituted a five-minute seder, for which the students were required to come in specially.  Its purpose was to accustom them to value time and concentrate their thoughts quickly.

Baruch Pelta was kind enough to post this article from the Yated on Rav Wolbe’s view of TIDE.
Well worth the click of your mouse!!

Dixie Yid, who has probably done more in promoting the works of R Itamar Schartz (online) than anyone else, has posted details about the author’s tour in the US.  Please feel free to read the details here.

The works of Rav Schwartz are profound, accessable, and truly are tools in helping a Jews connect to Hashem.  Several English translations of his writings are available here.  Personally, I’ve grown by both his seforim and Rav Weinberger’s shiurim based on Rav Schwartz’s seforim.