As a parent I wonder how my children behave when I’m not around. We all hope that our kids learn positive things at home and in school and apply the lessons in everyday life.

My wife was recently told the following story about our first grader.
My son’s gym class was having a unit on rollerskating. The mother of one of the kids’ was helping out the gym teacher one day and told my wife that she’s so happy her son has a friend like our son.

It seems that her son has having a little trouble getting comfortable on rollerskates. She observed my son whizzing by on his rollerblades. She saw my son pass her child, as her son fell, and my son circled around to see if he was alright.

This mother then told my wife that she saw my son purposely fall down and say to her son, “See, everyone falls down. It’s no big deal”. My son helped his friend up and they continued on.

I am thankful to have experienced true nachas ruach! 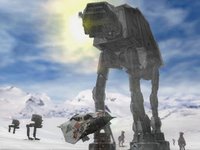 (Screenshot from Star Wars: Battlefront for PC)
I’ve always enjoyed snow. The blanket of tranquility that comes from looking out your window and watching it fall onto the trees is something that I love. It remind me of playing in the snow as a kid and sledding with my own kids.
We’ve got tons here in Chicago. It takes forever to drive anywhere. I spent about an hour cleaning my driveway when I came from from work the other day. I took a look an hour later and we had another inch. All this snow, cold weather and me dressed in earmuffs, gloves, and a hat reminds me of being in third grade and seeing the planet Hoth from The Emipre Strikes Back for the first time.
I couldn’t resist playing Star Wars Star Wars: Battlefront on my computer the other night. It’s awesome! I hadn’t sat down to play in over a year, but it was great. I, of course, went straight to Hoth. The feeling of flying a snowspeeder and taking down an AT-AT is great. Like a childhood dream come true. A little fun never hurts!
Rebbe Nachman teaches: It is a great mitzvah to be happy always. Strengthen yourself to push aside all depression and sadness. Everyone has lots of problems and the nature of man is to be attracted to sadness. To escape these difficulties, constantly bring joy into your life – even if you have to resort to silliness” (Likutei Moharan 2, 24).

(I hope someone gets this posting title)

Gut Chodesh. I usually have to remind myself that happiness should be a given. Adar just happens to be a month when it’s easier to receive the natural simcha that is available to me all the time.
Rabbi Akiva Tatz defines happiness as the natural expression of your neshama doing what its’ created to do. I don’t let myself have fun enough. I often let most aspects of my life become way too serious. I hope to work on this during Chodesh Adar and loosen up a bit.
Here’s a small list off the top of my head of things that happened during the past 36 hours that made me happy:
My kids being themselves and showing their personality
My wife laughing
My 4 yr old uberdaughter who lastnight started singing along to Hafachta
My 7 yr old uberson wanting to share something he learned on the parsha
My wife being happy soley because I am happy
When I read that Rav Nosson Tzvi Finkel zt’l, the Alter of Slabodka, would say that “he did not have a Yeshiva-one unit of hundreds of students, but rather he had hundreds of individuals.”
Being around good friends
Seeing our 4 month old smile for no reason what so ever
Eating my wife’s grilled chicken Caesar salad
Rav Hirsch writes in THE NINETEEN LETTERS that, “Happiness decreeded in accordance with compulsory, external standards ceases to be happiness.” (Second Letter)
What make you happy?

It is cold. this past Shabbos (and most of this week so far) is the coldest weather I have ever experienced. I was cold like this once before, back in the winter of 1984. I attended an NCSY shabbaton that was, for some reason, held on a camp ground in Eureka, MO. I only remember two things from that Shabbos: freezing and meeting Lenny Solomon. Anyway, back to the post…

This is how my mind works most of the time:
As I walked out the door Shabbos morning to go to shul I carried my 8 oz cup of hot coffee. It stayed hot for about a minute and a half, then became Iced Coffee. As I finished it and threw the cup in the garbage I thought about how funny it is that an 8 oz cup of coffee (literally a ‘cup’) is really not the standard size for a cup of coffee today. All thanks to Starbucks. Prior to 1997 there were only three cups sizes you could buy coffee at a Starbucks:
Short (8oz)
Tall (12oz)
Grande (16oz)

Then it was decided by the powers that we were not drinking enough coffee. The ‘short’ size was eliminated and the ‘Venti’ size (20oz) was added to their menu. Short be came obsolete and was replaced by the now industry standard of a 12 oz cup (‘Tall’ in Starbucks-speak).

As I continued my walk to shul, I thought about paradigm shifts and how our values, standards, and goals can change with a thought, something our spouse or children say to us, or something we read. I then remembered one of my favorite stories.

The story below, from Am Echad Resources, was written by Howard Schultz (chairman and chief global strategist of Starbucks). This article is excerpted from a speech he delivered, and is reprinted courtesy of Hermes Magazine, Fall 2001, a publication of Columbia Business School.
From AM ECHAD RESOURCES:

When I was in Israel, I went to Mea Shearim, the ultra-Orthodox area within Jerusalem. Along with a group of businessmen I was with, I had the opportunity to have an audience with Rabbi Noson Tzvi Finkel, the head of a yeshiva there [Mir Yeshiva]. I had never heard of him and didn’t know anything about him. We went into his study and waited 10 to 15 minutes for him. Finally, the doors opened.
What we did not know was that Rabbi Finkel was severely afflicted with Parkinson’s disease. He sat down at the head of the table, and, naturally, our inclination was to look away. We didn’t want to embarrass him.
We were all looking away, and we heard this big bang on the table: “Gentlemen, look at me, and look at me right now.” Now his speech affliction was worse than his physical shaking. It was really hard to listen to him and watch him. He said, “I have only a few minutes for you because I know you’re all busy American businessmen.” You know, just a little dig there.
Then he asked, “Who can tell me what the lesson of the Holocaust is?” He called on one guy, who didn’t know what to do — it was like being called on in the fifth grade without the answer. And the guy says something benign like, “We will never, ever forget?” And the rabbi completely dismisses him. I felt terrible for the guy until I realized the rabbi was getting ready to call on someone else. All of us were sort of under the table, looking away — you know, please, not me. He did not call me. I was sweating. He called on another guy, who had such a fantastic answer: “We will never, ever again be a victim or bystander.”
The rabbi said, “You guys just don’t get it. Okay, gentlemen, let me tell you the essence of the human spirit.
“As you know, during the Holocaust, the people were transported in the worst possible, inhumane way by railcar. They thought they were going to a work camp. We all know they were going to a death camp.
“After hours and hours in this inhumane corral with no light, no bathroom, cold, they arrived at the camps. The doors were swung wide open, and they were blinded by the light. Men were separated from women, mothers from daughters, fathers from sons. They went off to the bunkers to sleep.
“As they went into the area to sleep, only one person was given a blanket for every six. The person who received the blanket, when he went to bed, had to decide, ‘Am I going to push the blanket to the five other people who did not get one, or am I going to pull it toward myself to stay warm?'”
And Rabbi Finkel says, “It was during this defining moment that we learned the power of the human spirit, because we pushed the blanket to five others.”
And with that, he stood up and said, “Take your blanket. Take it back to America and push it to five other people.”

I made it to shul and forgot about being cold. I remembered the blanket and for the past four days have been opening my eyes to chessed oportunites.