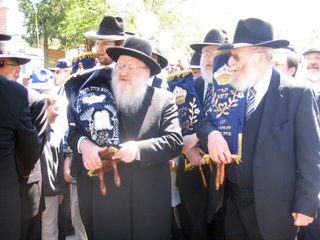 Rabbi Harry Maryles wrote an excellent piece, about what it take to make a Gadol Hador for today. I posted this:
I wonder if yiddishkeit can actually handle a Gadol HaDor? I’m hoping to get feedback from people older than I am (I was born in 1970), but was yiddishkeit more unified 35-50 years ago. I know there were less yeshivas and day schools. Were we more tolerant of other hashkafos in the 50’s and 60’s? Parents and their children were, literally, the post-Holocaust generation. They survived near extinction and saw a home-land be born. I think most frum Jews under the age of 40 today would have a problem universally accepting ONE Gadol.
Now, let me expand why it will be hard for those under the age of 40 to have ONE Gadol. Once I read Rabbi Maryles’ post I solved a puzzle that had been brewing in my head for over two years. Most trends and movements in the non-Jewish world eventually ripple into frum society. The best example is the Enlightenment with brought about Haskalah.

Over two years ago I read about Generation C on the Trendwatching website. Check this out here, and then click back.

I wondered when would the frum world become victims to Generation C… the content Generation? We live in a world where we control as much of our individual content as possible. I’ve got 40 ringers on my Treo, not to mention the mp3’s I can use as ringers (not during Sefira, of course). We’re blogging, My Spacing, and creating our own content. Even Artscroll has cashed in on helping us indivualized our davening content… here.
Do we really need four types of leather to choose for our siddurim?
The general division of frum yidden is only magnified by those of us who fall into “Generation X”. So named, because we don’t fit into any description. We are fragmented. It’s really no surprise that there is division among todays’ RW, LW, Charedim, Modern, parents, teachers, and principals. If we don’t know who we are, how can anyone accept on Gadol?
As I think about what e-lists I belong to I’m as confused as anyone. On any given Friday, I’m printing: Rabbi Frand, Rav Kook, Yated, and Torah MiTzion…just to name a few. Why? Because I’m controlling the content of what I read on Shabbos!!!
If I had to guess, my generation won’t have a Gadol Hador. It will take a generation to realize that fracture won’t help klal Yisroel. With Hashem’s help my children and Rabbi Maryles’ grandchildren will have worked out the issues and once again we will have a Gadol.